Library of Congress in Washington to house English-translated Talmud 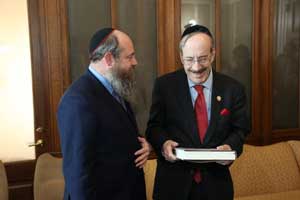 (JNS) – The world’s largest library—the Library of Congress in Washington, D.C.—is scheduled to house a version of the Talmud.

Translated from Hebrew to English by scholar Rabbi Adin Even-Israel Steinsaltz, the religious tome will enter the library in a ceremony on Thursday, March 5 when Steinsaltz’s family is slated to receive a certificate of honor.

Rep. Eliot Engel (D-N.Y.) noted that Steinsaltz has authored more than 60 books and hundreds of articles on Jewish mysticism, religious thought and philosophy.He is “the first person since medieval times to have completed a full translation and commentary on the Babylonian Talmud,” he said.

Engel added, “As the nation’s pre–eminent library, it is truly an honor for Rabbi Steinsaltz’s work to be housed in the Library of Congress.”