Life of late Rabbi Jonathan Eichhorn to be noted in Kingston on Oct. 29 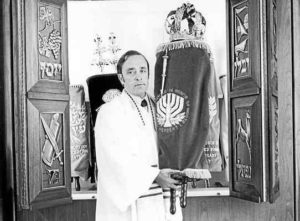 KINGSTON –Congregation Emanuel of Kingston will celebrate the life and work of its late rabbi, Rabbi Jonathan Eichhorn in a program on Sunday, Oct. 29 at 2 p.m. at the synagogue, 243 Albany Ave., Kingston. The rabbi’s wife, Suzanne, and the couple’s children will share memories and show photographs. All are welcome.

Eichhorn, who died on May 12, 2017, at the age of 80, served both the congregation and the Hudson Valley Community that he had called home for 36 years.

A “tireless advocate for the poor and homeless,” said the Daily Freeman, Eichhorn founded the Ulster County Religious Council in the ’80s. Serving as its chairman until his retirement, the Council was considered  a unifying force in Ulster, bringing religious leaders of many faiths together with activists, laypeople and local politicians. Eichhorn also served as a part-time prison chaplain in the New York State prison system.