Likud, Blue and White election deadlock has a silver lining, according to analyst 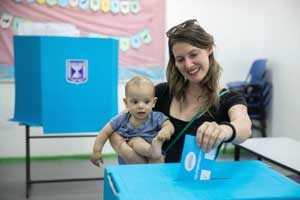 A woman holds her baby as she casts her ballot at a voting station in Jerusalem during the second round of Israeli elections on Sept. 17, 2019. Photo by Yonatan Sindel/Flash90.

By DOV LIPMAN
(JNS) – Israel’s second election of 2019 ended, like it did back in April, with no clear winner. As polls indicated leading up to the Sept. 17 election, no Knesset member has a clear path to form a 61-mandate coalition and be crowned prime minister.

A Clear Winner?
According to professor Yedidia Stern, vice president of the Israel Democracy Institute and former dean of the law faculty of Bar-Ilan University in Ramat Gan, that’s not quite true; the clear winner, he states, is Israel’s democracy.

The electoral process will now shift to Israel’s President Reuven Rivlin, who after consulting with each party, will likely ask either Likud Party leader Benjamin Netanyahu or Blue and White Party leader Benny Gantz to try to form a government. The process will take more than a month.

But, according to Stern, the end result is already clear.

“The nation of Israel is smarter than its leaders,” Stern told JNS, “and the nation voted for unity.”

The fact that neither bloc won, he said, “opens the option of a joint victory for the majority,” referring to a national unity government between Likud and Blue and White. Stern went on to say that “unity is critical at this point in order to reduce the walls of hate that have been established here” between the political camps.

Role Of Smaller Parties
According to Stern, the election results have yielded one concrete result: “saving the rule of law in Israel.” He explained that given the results, Netanyahu and the Likud “cannot find enough partners to enable Netanyahu to form a government that will provide him with immunity from the corruption charges he faces.”

Netanyahu currently faces three separate corruption investigations and has been trying to push through legislation granting sitting prime ministers immunity from prosecution. In a unity government scenario, however, he will not have the support he needs to pass such legislation.

The smaller parties played a significant role in creating the current stalemate.

The Joint Arab List has declared victory with its 13 mandates and more than 60 percent voter turnout.

Joint List leader Ayman Odeh told Israel’s Army Radio that “we stopped Netanyahu from forming an extremist right-wing government.” He explained that the high voter turnout in the Israeli Arab sector, which took mandates from the right-wing camp, was “the result of Netanyahu’s anti-Arab incitement,” adding that now everyone knows that “incitement comes with a price.”

Pindrus noted that ultra-Orthodox parties were attacked significantly during the campaign, and this, he said, led to a boomerang effect in which the “the entire ultra-Orthodox community” came out to vote, resulting in higher numbers than expected.

New Left Party
An additional party touting its accomplishment is the Democratic Union, which looks like it will be the smallest party in the Knesset with five seats.

Former Labor Knesset member Stav Shaffir, one of the founders and leaders of the new party—a merger between the left-wing Meretz Party and former Prime Minister Ehud Barak’s Independence Party—told JNS that “we saved the left-wing camp from falling under the threshold.”

Meretz was at risk of not crossing the 3.25 percent electoral threshold before the Democratic Union was founded.

Can There Be Unity?
Shaffir added that “we also restored the fighting spirit of the left-wing camp. Now everyone in our camp needs to work together to form a new government.”

A unity government requires one of two things to happen: Either Blue and White has to back down on its promise not to sit in a government with Netanyahu, or Likud needs to remove Netanyahu as its leader, and join Blue and White with another Likud Knesset member at its helm.

Likud Tourism Minister Yariv Levin declared that “no one will tell us who the prime minister from our party should be. Netanyahu is our leader, and we will only join with those who accept him as the prime minister.”

Stern told JNS that the options are now clear: “Either Blue and White sits with Netanyahu, Netanyahu steps aside as head of Likud and prime minister, or Israel will head to a third election.”