Lobstergate’ and non-kosher coercion; Israelis have a few laughs 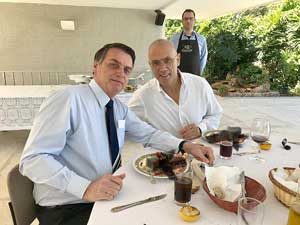 By RUTHIE BLUM (JNS) – In the midst of countrywide fury over two deadly serious issues—the killing of an Ethiopian Israeli teen by a police officer in Haifa, and the horrifying abuse of toddlers at a private Rosh Ha’ayin day-care center—Israeli Twitter users turned their attention to a faux pas involving non-kosher food and Photoshop.

The Incident
The “diplomatic incident” that caused a social-media storm occurred when the Israeli Embassy in Brazil proudly tweeted a picture of Ambassador Yossi Shelley having lunch with President Jair Bolsonaro. In the photo, the smiling compadres are seen dining at a restaurant in Brasilia ahead of the Copa América soccer championship, which they were attending together.

The trouble surrounded the food on the table: two plates of whole lobsters. Someone in the P.R. department at the Israeli Embassy must have concluded that such a display would cause a problem for Shelley, since lobster is prohibited by Jewish dietary laws. As representatives of the Jewish state, Israeli diplomats are discouraged from openly exhibiting violations that might be offensive to observant Jews.

Sarcasm
To stave off anticipated criticism from certain sectors, the Israeli Embassy decided to doctor the photo. Rather than cropping out the plates, however, the graphic tampering took the technologically primitive form of black X-marks over the two lobsters with a childlike Sharpie-looking scribble.

To make matters worse, the edges of the pink crustaceans are visible.

As soon as the photo was posted, the Twittersphere went wild with ridicule, more for the poor job of camouflage than over the fare itself. The “cover-up” was also made fun of by Brazilians sarcastically noting Bolsonaro’s lavish lifestyle, which includes dining on expensive seafood.

Memes began to spring up. Among these was a screenshot of Disney’s “The Little Mermaid” poster, with the lobster next to her blacked out. Another was a photo of a pineapple pizza—the subject of a different hilariously heated debate—with the fruit covered in black marker.

Shelley, who clearly had been more focused on the warm relations that Israel has enjoyed with Brazil since Bolsonaro’s election in January than on his menu, had not grasped the depth of his lobster gaffe.

Excuses
On Monday, the ambassador released a statement to reporters, claiming: “1) The meal in question took place at the presidential palace, Bolsonaro’s residence; 2) All kinds of dishes were served, including salmon; 3) I did not eat what was put on my plate [but did not reject it], so as not to offend participants; 4) For the same reason, I blacked out the photo, so that, heaven forbid, it would not be misinterpreted; 5) Brazil won the finals.”

In an interview about “lobstergate” on Israeli TV that evening, Shelley changed his story somewhat.

“Yes,” he said, “all kinds of seafood, if you want to call it that, was served. I don’t eat that stuff, and certainly never order it. I put it aside and took salmon, which is similar in color. You’re at a private meal and served food. What are you going to do? Throw it away? It doesn’t overshadow my or the country’s relationship [with Brazil]. So I didn’t eat the shrimp … I did eat, but … ”

Confused, his interviewer asked, “So, you did eat shrimp?”

“No,” Shelley replied. “Absolutely not.”

The fact that Shelley doesn’t know the difference between lobster and shrimp suggests that he was telling the truth about not partaking of it. Many Israelis, even those who do not keep kosher, find shellfish and pork—both strictly forbidden—to be repugnant.

But whether or not he lied about what he ingested, he never addressed the question of why someone more Photoshop-savvy wasn’t tasked with posting the picture, which he has since deleted from his Twitter feed, in the first place. Israel is supposedly the “startup nation,” after all. The least its messengers abroad could do is show a little ingenuity.

The positive side to this story is that the country had some comic relief from the genuine clawing controversies of the day.

Serious Backstory
Less amusing is the reason behind Shelley’s need to explain himself, as so many Israeli figures are forced to do for fear of arousing the wrath of the country’s more extreme religious elements.

In August 2015, for example, after meeting with then-Italian Prime Minister Matteo Renzi at the Palazzo Vecchio (Florence’s City Hall) to discuss the Iranian nuclear deal and bilateral relations between Rome and Jerusalem, Israeli Prime Minister Benjamin Netanyahu was taken to Enoteca Pinchiorri, considered one of the world’s best restaurants.

Upon his return home, Netanyahu’s ultra-Orthodox coalition partners began to grumble about his having violated Jewish dietary laws while abroad. In interviews with the haredi website Kikar Hashabat, a number of these politicians blasted him for it.

One said he “expected the prime minister of Israel, who represents the Jewish state in an official capacity, to behave with more statesmanship and not to eat publicly in such a restaurant,” adding, “Whoever maintains a religious constituency that keeps Jewish traditions and considers themselves a major partner of the haredi parties, should have behaved with more caution and sensitivity, considering he speaks so highly of his own respect for the traditions of Israel and the Bible.”

A year earlier, after addressing the U.N. General Assembly, Netanyahu had lunch with casino magnate and Israel Hayom owner Sheldon Adelson at a non-kosher New York eatery, which the haredi press called a “pig restaurant.”

Tisha B’Av Dining
This was reminiscent of a similar ultra-Orthodox outcry spurred by legendary Jerusalem Mayor Teddy Kollek—not for his eating in a non-kosher restaurant, but for eating at all on the eve of Tisha B’Av, the commemoration of the destruction of the Temple, which is a fast day.

It is hard for anyone living in Israel today to believe that a few decades ago, there was even a single restaurant open on Tisha B’Av. Over the years since the incident, after which Kollek profusely apologized for his “blunder,” all places involving food or entertainment began to close down on that evening, even in Tel Aviv, a city considered so secular that it is teased about not being part of the Jewish state.

Like Kollek’s before him, Netanyahu’s response was to go on the defensive. Following both of his own dining “scandals,” the Israeli premier insisted that he hadn’t eaten any non-kosher food, going as far as to assert that he keeps a kosher home.

Powerful Haredim
This might even be true since all official residences in Israel have kosher kitchens to enable the invitation of Orthodox guests to the table. Nobody disputes that such sensitivity to religious-Jewish ritual is fitting.

But why should haredim, different sects of whom don’t even validate the kosher certificates of competing rabbinical authorities, be preoccupied with the food served in other countries to Israeli politicians and diplomats—many, if not most, of whom aren’t observant—particularly when those figures are engaging in important state business? More importantly, why do dietary critics wish to call attention to practices that they consider unorthodox?

The irony is that “only eating salmon” is not an excuse in the eyes of sticklers. From their perspective, no food in a non-kosher establishment is permissible. Nor can any amount of black ink scrawled pathetically over a plate of lobster blur that reality.

Ruthie Blum is an Israel-based journalist and author of To Hell in a Handbasket: Carter, Obama, and the ‘Arab Spring.’