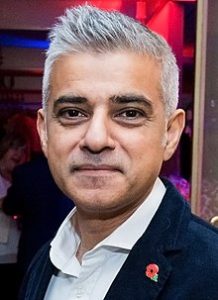 In a statement, Khan called on his colleagues in the Labour Party to follow suit and said he took the action to demonstrate “support and appreciation” for British Jews.

“There’s no question, in my mind, that the Labour Party has been far too slow at stamping out appalling anti-Semitism by some party members and supporters,” Khan said.

Khan has spoken out against anti-Semitism in the party in recent years, and condemned the party’s lack of action, according to the London-based Jewish Chronicle.

“I know it’s been an extremely difficult time for members of the Jewish Labour Movement. Like me, the vast majority of those within the party are devastated by how let down the Jewish community and Jewish Labour members are feeling,” Kahn said. “That’s why it’s so important that we come together across the Labour movement to do whatever we can to make Jewish people feel at home in our party once again.”

Former British Prime Minister Gordon Brown announced in a video message posted on Twitter at the beginning of the month that he had joined the Jewish Labour Movement in solidarity with British Jewry.

Labour Party leader Jeremy Corbyn has been accused of allowing anti-Semitism to grow among many thousands of supporters who joined the party in support of his policies. He has denied the accusation, vowing to punish hate speech promoters.

Measles was eradicated … now it’s back, thanks to anti-vaxxers
Polish nationalists object when U.S. envoy wishes Jews a happy Passover