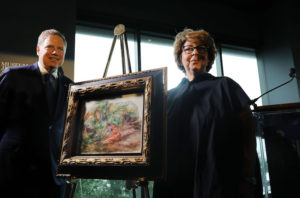 U.S. attorney in Manhattan Geoffrey S. Berman, left, and Sylvie Sulitzer posing on Sept. 12 at the Museum of Jewish Heritage in New York with the recovered Impressionist painting “Two Women in a Garden,” painted in 1919 by Pierre-Auguste Renoir. The painting, originally belonged to Sulitzer’s grandfather Alfred Weinberger, was confiscated by the Nazis in Paris during the World War II. Phot courtesy of Spencer Platt/Getty Images.

NEW YORK CITY (JTA) — A Renoir painting that the Nazis stole from a Paris bank vault was recently returned to the heir of its owner. U.S. authorities returned the 1919 work “Deux Femmes Dans Un Jardin” to Sylvie Sulitzer of France, the last remaining heir of her grandfather Alfred Weinberger, at the Museum of Jewish Heritage in New York. The painting by Pierre-Auguste Renoir, a famed Impressionist, is worth at least $300,000.

Although Sulitzer knew her grandfather, she had no idea about the missing Renoir until a German law firm, specialists in recovering art looted by the Nazis from Jewish families, contacted her in the early 2010s, Agence France-Presse reported.

“I’m very thankful to be able to show my beloved family wherever they are that after all they’ve been through, there is justice,” Sulitzer said.Her grandfather was a prominent art collector in prewar Paris. Four other Renoirs and a Delacroix, which her grandfather also owned, have yet to be recovered, Sulitzer told AFP.

The Nazis stole the art in December 1941 from the bank vault where Weinberger stored his collection when he fled Paris at the outset of World War II.

During World War II, the Nazis created a division known as the Einsatzstab Reichsleiter Rosenberg (the “ERR”) in order to “study” Jewish life and culture as part of the Nazis’ propagandist mission against the Jews.  Principally, the ERR confiscated artworks and other cultural holdings of the enemies of the Reich on a massive scale, and meticulously registered and identified those artworks —even photographing them — thereby leaving behind a detailed record of the works that they stole.

Following the war, Weinberger spent decades trying to recover his property, registering his claim with French authorities in 1947 and with the Germans in 1958.

U.S. officials said the Renoir first resurfaced at an art sale in Johannesburg, South Africa, in 1975, before finding its way to London, where it was sold again in 1977. It was put up for sale again in Zurich, Switzerland, in 1999. It was last sold in 2012 in the United States for $390,000, The New York Times reported. But it was only when it was put up for auction by a private collector at Christie’s in New York that the auction house called in the FBI. Its previous owner eventually agreed to relinquish the painting.

FBI Assistant Director-in-Charge William F. Sweeny Jr. said: “The atrocities that took place during World War II at the hands of the Nazis cannot be summed up in a few words. They murdered, tortured, and plundered during their attempt to take over Europe and the world. In the process, they also carried out smaller acts of evil behavior, stealing hundreds of thousands of these pieces of priceless artwork. Some of those pieces are lost to our culture forever. However, we take a bit of pride in returning a painting looted during the war, and helping repair some of the destruction of decades ago.”

It is thought that up to 100,000 works of art, and millions of books, were stolen from French Jews, or Jews who had fled to France before the Nazi occupation began in 1940.