Marilyn Monroe’s siddur to be auctions 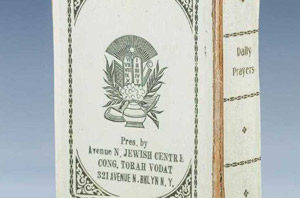 NEW YORK (JTA) – An item that belonged to Marilyn Monroe is being put up for auction and it’s not quite what you’d expect. Next month, one lucky fan of the late actress will be able to acquire a Jewish prayer book, or siddur, that she owned.

Monroe converted to Judaism in 1956 prior to her marriage to Jewish-American writer Arthur Miller. Though the couple divorced five years later, the blonde bombshell said she would not abandon her new faith

Rabbi Robert Goldburg of Congregation Mishkan Israel in New Haven, Connecticut,  who oversaw her conversion and officiated at her wedding to Miller, said that she told him that she was still committed to being Jewish.

The siddur is being sold on behalf of its current owner, an American living in Israel who bought it from Monroe’s estate in 1999, The Jewish Chronicle reported. The prayer book was previously put up for auction in 2017 and went unsold.

Monroe seems to have put the siddur to use. The description says that it contains notes that are “apparently in her hand” and that the spine is nearly detached.