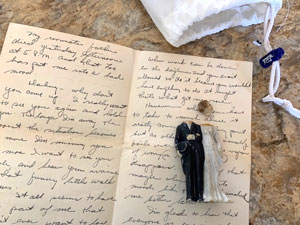 By MARILYN SHAPIRO
Passover will not completely pass over us this year.

When the spring holiday occurred last year, we were only three weeks into the reality of the pandemic. Larry, my husband, and I had a small, quiet, seder for two. This year on March 27, we will have a “virtual” Zoom seder with our Kissimmee, Fla. congregation.

Gratitude, But…
We have been fortunate. As were our Hebrew ancestors, our family and circle of friends have been spared the “angel of death” in that we lost no one to this (God willing) once in a lifetime scourge. Friends who contracted the illness have survived, albeit with some lingering effects that we hope and pray will result in a r’fuah sh’leimah, a complete recovery.

Despite my gratitude, too many times this year I felt that more than Passover had passed us by. I know I share the feelings of so many others that we have lost a year. It has not only been the lifecycle events—first birthday parties, bar mitzvahs, weddings, graduations, and even funerals. It has also been the small things: a restaurant dinner with friends; a movie or play, a live sporting event, and importantly a hug from a friend.

This feeling of ennui especially hit me when February arrived. When we lived in Upstate New York, the second month of the year had always been difficult as I was tired of the cold, the snow, the bleakness of winter. Now that we were living in Florida, we were liberated from the end-of-winter blues. Larry and I still were able to enjoy long walks and long bike rides in the sunshine. Physically, I was doing fine. But emotionally, I felt sad cold and tired and in darkness. Would this pandemic ever end? Would our children and grandchildren be able to get vaccinated? Would we be able to travel to see them this summer? When would the world begin to return to what feels normal?

Malaise
Getting on Zoom calls was a chore; if I did sign on, I remained quiet, content to work on my crewel piece or check my text messages. Telephone calls were even more difficult; it was just too much work to talk about our endless “Groundhog Day” routine: morning exercise; afternoon puzzles and projects; late afternoon dinners; and evenings on the couch watching Netflix or reading a book.

In the middle of all this, I was working on my third book. Tentatively entitled Fradel’s Stories, the book when completed will be a compilation of essays my mother had written in the last five years of her long life as well as essays that I had written about my parents and family, many which had been published in The Jewish World.

My mother had passed away on March 2, 2011, and I was determined to get the first “run” to my editor to correspond with the 10th anniversary. I devoted hours to organizing, editing, and re-editing. What should have been a labor of love was turning into just labor. Of course, that put more pressure on me, something that I certainly didn’t need in my emotionally depleted state.

Parents’ Story
On the third Saturday in February, I opted out of my usual exercise-in-the-morning routine and continued editing the second hard copy of the manuscript. When I got to the chapter that Mom had called My Romance, I brightened as I read, “The saying goes, ‘You have to kiss many frogs until you meet your true love.’” my mom had added, “Well, I knew many frogs.” She then went on to describe the Toms, Dicks, and Harrys she had dated while living and working in New York City until she was introduced to Bill Cohen, her brother’s and her cousin’s co-worker in an Upstate New York clothing store.

After a whirlwind three-month courtship, my father proposed over ice cream on Feb. 14, 1940. “We had just seen “Gone With the Wind,” Mom wrote. “Bill must have thought I was Scarlett O’Hara, and I must have thought he was Rhett Butler.” They were engaged!

Over the next few months, separated by 300 miles, they continued their romance. They saw each other infrequently but wrote often. Mom had kept the letters in her dresser her entire life.

Rediscovery Energizes
“Where are they now?” I wondered. Then I remembered that I had found them when my siblings and I were emptying her apartment soon after my mother had died. They were now in my treasured correspondence box.

Although I had known about the letters for 60 years, I had never read them until that recent Saturday morning. The first one I read, from my father, spoke of feeling “sad cold and dark.” Oh my goodness! He was also describing me!

His remaining letters expressed his love and excitement about their pending marriage. My mom’s letters shared some of his romantic sentiments, but the majority of them described wedding preparations and constant reminders for Bill to get his Wassermann test before the Aug. 20 ceremony.

After reading them all, I called all three siblings to share the emotional news of my find. That triggered more memories, more family stories. Laura reminisced how her eight-year-old self had found our parents’ love letters and decided to play post office by delivering them to each of the mailboxes on Waverly Street. Jay remembered how, while living in that same Upstate New York house, he and a fellow five year-old had called the fire department to report a “blaze” so the two of them could get a first hand look at the town’s new fire engine. Bobbie remembered another letter—the one my parents had written to her in 1977 when, as a recent college graduate, she was struggling to find a job—that she has kept over 43 years.

After my phone calls, I went back to the kitchen table to resume work on my book, but I was no longer alone. My siblings’ stories echoed in my mind. More strikingly, I felt my parents’ strong presence, surrounding me with encouragement to keep writing and with quiet assurance that “This too shall pass.” Recalling through their stories how they had survived the Spanish Flu, the Great Depression, World War II, and their own nine decades of ups and downs, I knew my family and I would survive COVID-19 and its resulting tsouris—troubles.

Ten days later, I felt confident enough to send my manuscript to my editor. We still have months of work ahead— more editing, picture placements, cover design. But I know that on Sept. 1, what would have been my mother’s 104th birthday, Fradel’s Stories will be launched on Amazon.

Readies For Pesach
Soon, I will give my house a thorough cleaning, make my chicken soup and matzah balls, chop up my apples and nuts for the charoset and set our table for our Zoom seder. With the recent good news on the medical front, I have faith that next year’s seder will be a more crowded, joyous, affair.

Meanwhile, Passover and spring are here. Thanks to the love and memories of my parents and memories my siblings have shared with me, the fog has lifted.