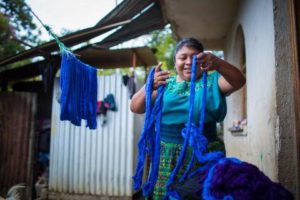 By BRENDA ROSENBAUM
Miriam Batz leads the women’s group that crochet the Mitzvah Kippot for  the free trade organization, Mayan Hands. Her life epitomizes the experiences of most Mayan women in Guatemala today. Although each individual has her own story, they share similar challenges and struggles, and meet these with resilience and a willingness to work hard. Miriam’s story is one of devastating poverty but also of ingenuity, courage and hope.

She was born to extremely poor parents in a village around Lake Atitlan. Her father barely eked out a living working in other people’s fields, while her mother cared for their five young children.  Miriam was only 8 when her father died.  Suddenly her family was thrown into even deeper destitution and despair.  Her mother found day work washing onions to prepare them for sale, but she earned almost nothing.

Miriam remembers those years.  “After my father died, I used to go out to the fields with my younger brother, looking for greens that we would wrap in corn leaves.  We would take these small bundles from house to house, and people would give us a few old tortillas or stale bread in return.  That is what my siblings and I ate.”

Education Ends
“At that time I was still going to school.  My mother couldn’t give me, or my siblings any money to take to school. So I would ask my teacher if I could stay in the classroom instead of going out to play with all the children. I would use the time indoors to braid 5 or 6 bracelets. I would sell them for a few pennies to my classmates and earn three or six cents. Then I would buy a few peanuts or toasted fava beans with the money.”

When Miriam left school in 5th grade, her mother apologized for not being able to support her studies. “I’m sorry, my daughter, that I cannot continue sending you to school. I have no money at all, no money for you to buy even a pencil or a notebook.”

Miriam took stock of her situation and moved forward. “We were so poor, every day was a struggle.  I started thinking, what kind of future will I have?  Will I always live in poverty like this or will I find a way to earn some money? I was only 9, but I was steeped in my mother’s despair. I decided to join a group of women I had heard of in my community. The name of the group was Mujeres Artesanas (craftswomen).”

“It was in that group that I learned to crochet. I experimented and came up with a design for a little crocheted ball. I would search the dumps for discarded yarns. I knew that often women who sewed aprons or blouses discarded bits of yarn or trimmings. I would pick these up and collect enough until I could start crocheting or embroidering.  That was how I learned to crochet and embroider.”

A Way Out
Miriam’s mother’s new husband was a violent man. He hit her mother and hit the children, too. When Miriam met her husband, she was desperate to escape her situation at home. He wanted her to live with him.  “I’ll 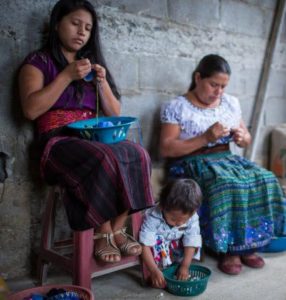 live with you on one condition,” she told him.  “I’m participating in a women’s group. If you don’t let me continue, I’m sorry, I can’t go with you. I was 14 when I went to live with him.  I had my first daughter at age 16, my second daughter at 20 and then my two boys.”

Her husband was also poor, he was illiterate and didn’t speak Spanish.  The two of them were day laborers in the coffee fields.

“When we started working in San Pedro (a neighboring town) there were no pickups, buses or tuk tuks (auto rickshaws).  We walked for one and a half hours to get there every day, then we went up the mountain to work in the coffee fields.  When my first child was born, my sister took care of her so I could work. My sister would feed her.  At the time, we didn’t have money for bread, milk, or any variety of nutritious food. We ate only a few tortillas and some beans.  I would give my sister six cents (at that time you could buy small amounts of beans for six cents or even three cents). That’s what my daughter ate. My husband and I worked hard like this for years and, little by little, we started building this small house we live in today.  It took us many years to build it, the walls slowly went up, and finally we installed the roof.”

Continuing Education
“I knew I wanted to continue my education so, when I went to live with my husband, I signed up for Conalfa, a program for women who’ve dropped out of school. I finished 6th grade in that program.  I signed up to continue studying at night, I studied for three years, and a few years later, I finished. I wanted to study not only for my own and my family’s sake but to help other women, to show them, with my example, that if they want to study badly enough, they can do it. It doesn’t matter how old you are, even if you have children or grandchildren.”

Miriam’s children are following in her footsteps. Her youngest son is in 6th grade.  He’s not sure what he wants to study, but he knows he’ll be a professional.  “You are the example for us, mother,” he told me.  “Nothing stopped you, you finished high school at 38.”

At 43, Miriam still dreams of becoming a social worker or a nurse.  She says that if she gets plenty of crochet work, she’ll be able to afford it.

Hacky Sacks And Kippot
As her own children were growing up, Miriam was sad to see so many children in her community suffer as she did growing up. She decided to organize a group of women to look for work opportunities together and to support each other.

“Let’s choose a name for our organization,” the women said. “Because we live near the lake, I suggested, how about ‘Stars of the Lake’ or ‘Flowers of the Lake?’  They said, no, let’s call it ‘Working Women of the Lake.’”

Years ago Working Women of the Lake started selling crocheted hacky sacks to middle men. At first they earned some money. A dozen sold for about $8 or $9.  But then everyone in the village and beyond started making them, and the price dropped to $1.60 per dozen or even $1.20 per dozen, ten cents each.  Including  the the price of the yarn, the women ended up earning a mere $1.30 per week.

When we first talked with them about the possibility of making kippot, the women were excited.  They had seen kippot in their marketplace, made a few and sold them to people for $2 ea.  When we offered to supply the yarn, they lowered the price to $1.30. With thousands of artisans in the country and scant opportunity to sell their work, the women knew that price was the prime factor, and were always willing to lower the price to get work.  We explained that our mission as fair traders was to strengthen the earning power of talented artisans.

Another woman in the Working Women of the Lakes, Juana, said, “Before we could not even buy a pencil or a notebook for our children, or give them five cents to take to school. Now we buy them all the school plies they need, we give them money for snacks and feed them well at home.” She  and others in the group  agreed that their lives have improved greatly since they started crocheting kippot for Mayan Hands.

Brenda Rosenbaum is a founder of, and volunteer with, the Mayan Hands, a fair trade organization that works to find markets for the textiles of Mayan women weavers in Guatemala. www.mayanhands.org. It is based at B’nai Sholom  Synagogue in Albany.