I’d only been working for Senator Hubert Humphrey a few weeks when his friend and colleague Sen. Richard Russell (D-Ga.) died in January 1971. Russell was a legend in the Senate, known as a master of both Senate rules and national defense issues. He respected for his intellect, integrity and honesty.

Alarmed By Russell’s Racism
The senator asked me to write some remarks in his friend’s memory that he could deliver on the floor that afternoon. I hadn’t expected to encounter any moral dilemmas, especially so soon, working for one of my heroes and a great American liberal who should have been in the Oval Office at that moment and not back in the Senate, notwithstanding his love of the institution.

Russell may have had good qualities but they were far overshadowed by his rabid racism. He was the leader of the Southern opposition to the civil rights movement, an avid and unapologetic segregationist and white supremacist to the core and to the end.

Knowing that Jews played a critical role in the civil rights movement that he so despised meant that he was no friend of the Jews, either. He had also opposed naming a Jew to be chief justice of the Supreme Court. Had he lived longer he probably would have followed most other southern Democrats who shared his views and gone into the Republican Party.

Russell once wrote, “I am willing to go as far and make as great a sacrifice to preserve and insure white supremacy in the social, economic, and political life of our state as any man who lives within her borders.”

Finding Common Ground?
I told Senator Humphrey, the great champion of civil rights, that for those reasons I could not do what he asked. I thought my Congressional career was about to end, but he said that he 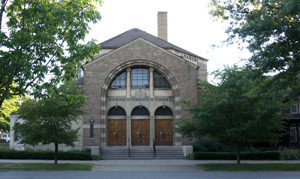 understood and would make some extemporaneous remarks himself.  (As an aside, no one was better at that than Humphrey.  One of my assignments was to write some speeches for the senator, and an old speechwriter from the vice-presidential days advised me, “You can write three pages and he’ll deliver six. That’s because Hubert is a textual deviate.”)

Humphrey told me that he and other liberals could fight all day on some issues with the likes of Russell and James Eastland and John Stennis, and yet find common ground on others, and still be friends. There were also issues on which they could agree and work together. At 28 I could not appreciate that.

Eventually the Old SOB was named for that old SOB from Georgia, Russell, and the newer building was named for the late Republican leader Everett McKinley Dirksen (the man who famously said of government spending, “a billion here, a billion there, and pretty soon you’re talking real money”).

Eventually a third office building went up and was named for Sen. Phillip Hart, a Michigan Democrat. Hart was one of three wounded World War II veterans in the Senate who had been friends since they recuperated in a Michigan hospital; the others were Daniel Inouye of Hawaii and Bob Dole of Kansas. Humphrey admired Hart and once told me, “He the closest thing to a saint you’ll ever meet.”

Adversity can bring out the best in some people. John McCain is a fine example.

And sometimes the worst, as with Trump. Richard Russell, whatever his other qualities, would’ve been comfortable in Donald Trump’s Republican Party with this president’s political base seemingly built on racism, white supremacy and ethnic hatred.

Time For New Name?
Democratic Senate Leader Chuck Schumer of New York has proposed renaming the Russell building (where McCain had his office) for the late Arizona Republican. You’d think it would be a no brainer, swap an unrepentant racist for a genuine hero.

But it appears unlikely. Senate Republican Leader Mitch McConnell, a man known more as an obstructionist than a visionary, sent the proposal off to a task force where he probably will kill it.

Resistance Rallies
Senator Richard Shelby, an Alabama Democrat who migrated to the more comfortable GOP, opposed Schumer’s proposal even if it meant two buildings named for Republicans. A proud son of the Old South, Shelby said rejecting Russell was tantamount to rejecting Washington and Jefferson, who had owned slaves a couple of hundred years earlier.

Interestingly, most of those who support replacing the name of a Democrat with that of a Republican is actually coming from Democrats. The resistance is from McCain’s fellow Republicans, who are urging patience and study. So far, the only Republican to endorse the proposal is Jeff Flake, Arizona’s junior senator.

An unlikely member of the resistance is Lindsey Graham, who had been McCain’s wingman for years but switched to Team Trump as his old friend was dying. Apparently, he is fearful of offending his new pal in the White House or the White supremacists that are a GOP base in South Carolina, where he plans to run for re–election in two years if Trump doesn’t name him to replace Attorney General Jeff Sessions.

McCain had ruffled a lot of Senate feathers throughout his career with his quick temper, occasional abrasiveness and zealotry.

No one in Washington despised or insulted McCain more than the tweeter in chief, and maybe Republicans are afraid of offending him if they vote to rename the Russell SOB for someone many of them and the president considered an SOB. One thing is certain, however: if the old Senate Office Building is renamed for John McCain, Donald Trump will never set foot in it.

US departure from conventional wisdom
A High Holidays plea: Listen to each other on Israel’s nation-state debate