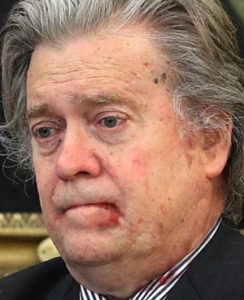 BY RON KAMPEAS
WASHINGTON (JTA) – As former White House strategist Stephen Bannon declares war on the Republican establishment, a faction linked to the Senate GOP leadership is firing back with the kind of charges previously heard from Democrats and Never-Trumpers when Bannon ran Trump’s campaign and sat in the White House. Namely: that the head of Breitbart News and self-described “economic nationalist” is, in fact, an anti-Semite and a white supremacist.

Jewish Defenders
The charges, leveled by top former aides to Sen. Mitch McConnell, R-Ky., the Senate majority leader, have shocked conservative Jewish backers of Bannon who have in the past robustly defended him when Democrats made the same allegation.

The charge blew into the open with a salvo on Twitter from the Senate Leadership Fund, helmed by Steve Law, a former chief of staff to McConnell. In one tweet, the fund included a link to a New York Daily News article from 2016 that alleged that Bannon had a history of making anti-Semitic comments.

Meanwhile, Josh Holmes, a former chief of staff to McConnell and outspoken critic of Bannon, called Bannon a “white supremacist” in an interview with The Hill.

The attacks came in the context of a primary challenge in Nevada from a Bannon-backed candidate, Danny Tarkanian, to the state’s incumbent Republican senator, Dean Heller.

Conservatives Blast McConnellites
Brooks noted that the RJC’s affiliated PAC will back Heller in 2018 and will likely face off against Tarkanian. “Dean Heller is a perfect example where Bannon and the RJC are on different sides, but I will absolutely defend Bannon — he is not anti-Semitic,” he said.

The Senate Leadership Fund is no outlier: It raised over $100 million in the last election and is endorsed by McConnell. Law also helms Crossroads USA, the massive PAC founded by Karl Rove, formerly a top aide to President George W. Bush.

“Let’s not act like everybody doesn’t know exactly who Steve Bannon is,” he told the Washington Post, noting Bannon’s avowed associations with the “alt-right,” a loose association of anti-establishment conservatives that includes white supremacists and anti-Semites, as well as robust defenders of Israel.

Morton Klein, the president of the Zionist Organization of America, was furious with the McConnell-backed attacks. “What Mitch McConnell’s people are doing is a disgraceful political act, promoting an ugly lie about someone he disagrees with,” Klein said, adding that the salvos have caused him to lose respect for McConnell. Bannon is scheduled to attend a ZOA fund-raising dinner in November.

Rabbi Shmuley Boteach, who as a Republican ran an unsuccessful 2012 congressional campaign in New Jersey, ridiculed the notion that Bannon is anti-Semitic, noting that he has hired Orthodox Jews in top positions at Breitbart.

“It trivializes the term, it makes a mockery of true anti-Semitism,” Boteach said. “It’s not good for Republicans, it’s never good for people to assail each other with ad hominem attacks that are personal.”

Bannon — The King Maker?
Notably, the RJC, the ZOA and the World Values Network, which Boteach founded, are all backed substantively by Sheldon Adelson, the Las Vegas casino magnate and Jewish philanthropist who also has in the past backed Heller. Klein, coincidentally, spoke to JTA just after meeting with Adelson in Las Vegas.

Tensions between the GOP establishment and Bannon were always present. As executive chairman of Breitbart, he favored Trump from the primaries’ outset because he reviled the party’s establishment. They have been simmering since he left the White House in August and returned to Breitbart with a mission of “going to war for Trump against his opponents,” who include mainstream Republicans like Heller and McConnell. Tensions came to a boil when Roy Moore, a handpicked Bannon insurgent, bested the establishment favorite, Sen. Luther Strange, in Alabama’s Republican Senate primary.

And when Arizona Sen. Jeff Flake  recently announced that he wouldn’t seek re-election, observers noted it was unlikely he could withstand a Bannon-backed challenge.

In Nevada, Arizona’s neighbor, Tarkanian, the son of a legendary coach and a perennially unsuccessful candidate for public office, has eagerly taken on the Bannon mantle. On Oct. 23, on Twitter, Tarkanian called on Heller to sign the “McConnell replacement pledge,” to remove the Senate leader.

At issue was a sworn affidavit by Bannon’s ex-wife who, in the course of a custody battle, said Bannon objected to allowing his twins to attend a school with Jewish girls. Bannon denied it, although some elements of the incidents she describes have been corroborated by others.

“I am proud to stand with my friend Steve Bannon against Heller/McConnell hatchet-man’s smear attacks,” Tarkanian said on Twitter.

If Tarkanian bests Heller in the primary, it will likely set up a rematch of the House seat he failed to win last year. The victor then was Jacky Rosen, a president of a synagogue in the Las Vegas suburbs, who is favored to be the Democratic Senate candidate.

The back and forth over whether Bannon is an anti-Semite is not likely to fade. Bannon has promised to run insurgents in seven of the eight states with Senate elections next year and that Republican now hold. And Democrats are eager to associate Bannon and his associations with the alt-right.

In Ohio, incumbent Democratic Senator Sherrod Brown claimed that Bannon is an anti-Semite and a white supremacist. In turn, a Republican rival favored by Bannon, the Jewish state treasurer Josh Mandel, struck back by saying that making such allegations should disqualify Brown.

Recently on CNN, Brown was asked whether he agreed with Rep. Frederica Wilson, D-Fla.—the lawmaker involved in a fight with the White House over whether Trump properly honored a black soldier slain in Niger—who said that there were white supremacists in the White House.

Brown agreed and named Bannon as one. He also named Stephen Miller, a senior adviser to Trump who is Jewish and who is an architect of the White House’s controversial immigration policies.

Breitbart News—where Bannon once again reigns as CEO—declared that assessment “false” and asked Mandel, the Ohio treasurer who hopes to unseat Brown, for comment.

“When Washington politicians get so terrified of losing their job and their cocktail party invitations, they embarrass themselves like Sherrod Brown did today,” Mandel told Breitbart News. “Career politician Brown’s charges against former White House advisor Steve Bannon and President Trump’s senior policy advisor are desperate, false and beneath the dignity of his office and the people of Ohio and he should apologize.” Mandel linked to the Breitbart story on his Twitter feed.

Brown is not likely to stop calling Bannon out. In August, after Bannon left the White House, Brown said in a tweet that the aide had “has promoted anti-Semitism, racism and misogyny, embracing bigotry and hate speech.”

Mandel, who lost his 2012 bid to unseat Brown, studiously avoided Trump before last year’s election and campaigned, as he has in the past, as a conventional Republican, favoring a robust U.S. posture overseas and fiscal hawkishness. Since the election, he has embraced Trumpism with a vengeance, even embracing “alt-right” figures like Mike Cernovich and Jack Posobiec.

Mandel in July attacked the Anti-Defamation League after the Jewish defense group listed Cernovich and Posobiec as members of the “alt-lite,” figures who reject the open racism of some on the “alt-right,” but who nonetheless peddle dangerous and false conspiracy theories. Cernovich and Posobiec were both proponents of the “Pizzagate” conspiracy theory, which led to a shooting attack on a popular Washington D.C. eatery that, the conspiracists’ claimed, hosted a pedophilia ring led by Hillary Clinton campaigners. This month, the Forward reported, Mandel was the first candidate to accept the endorsement of a PAC launched by Cernovich and Posobiec.

Mandel did not reply to multiple JTA requests for comment.

The Washington Post has reported that Bannon’s reaction to the Senate Leadership Fund’s attack on him, citing his ex-wife’s claims, was to laugh out loud.

Bannon has said over the years that while he welcomes the resurgence of a nationalist right in Europe and the United States, he recognizes that it attracts racists and anti-Semites, and he aims to push them away from the movement. Breitbart News is robustly pro-Israel and has also decried anti-Semitism on campuses and in Europe.

He also has said, however, that he welcomes attacks on him and those he endorses as racist, because it galvanizes resentful white voters who are fed up with tales of minority disenfranchisement.

Bannon at times appears to bait his opponents into making the charges of racism.

He and his proxies have mimicked some of the themes popular among white supremacists and anti-Semites: Breitbart News included for a time a news tag called “black crime.” Bannon refers repeatedly to “globalists” who seek to control the world’s economy, a framing typical of anti-Semitic conspiracy theorists.

Once Bannon assumed control of Trump’s campaign last year, the candidate made the sinister reach of “globalists” and bankers central to his campaign. Milo Yiannopoulos, the far-right provocateur who co-authored a major piece on the alt-right that ran in Breitbart in 2016, vetted the piece before publication with a neo-Nazi and a white supremacist, although it is not known whether Bannon, who was then directing Breitbart, was aware of the outreach.

In its last major ad before the election, the Trump campaign featured audio from the candidate’s jeremiad against globalists, running over unflattering images of Clinton, President Barack Obama—and three Jewish financiers.

Why you should fear skin cancer —and how to avoid it
DC Report: You are on your own sucker! Paying for Trump’s tax cuts…