Measles was eradicated … now it’s back, thanks to anti-vaxxers 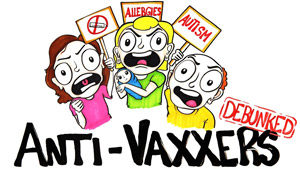 By RUTHIE BLUM (JNS) – Israel’s national carrier, El Al, has set up a special inoculation station at Ben-Gurion Airport to vaccinate its employees against the measles. So far, some 250 ground and flight crews have been vaccinated, with likely more to come. The makeshift clinic was created after the Israeli Health Ministry ordered all local airlines to inoculate their staff and called on the Israeli public to get fully vaccinated before taking any trips out of the country.

People Sick, Dying
The directive came after a 43-year-old El Al flight attendant contracted the measles during a flight that set out from John F. Kennedy Airport on March 26 and landed in Tel Aviv the following day. Although the woman was otherwise healthy and had been vaccinated as a child, she nevertheless caught the contagious disease, as she had received only one shot of the vaccine, rather than the recommended two doses these days. After being rushed to the hospital upon landing in Israel, she fell into a coma, and is thought to have suffered brain damage.

The same fate befell a 10-year-old boy on a flight to Israel.

A few months ago, two Israelis-an 18-month-old and an 82-year-old-died of the measles.

The above tragic stories, in addition to the 3,600 people and counting in the country who became infected with the disease between March 2018 and February 2019, are a drop in bucket of what is becoming a global health crisis. Indeed, more than 110,000 cases of the measles have been reported worldwide since the beginning of this year, and the number is growing daily.

It is bad enough that there are still poverty-stricken countries where vaccines of all kinds are hard to come by for parents desperate to keep their children safe from a wide range of what have become preventable diseases. Far worse is the phenomenon of affluent and educated parents in the United States and Europe, where the measles virus was virtually eradicated, who are choosing not to vaccinate their children for a variety of irrational reasons.

Fraudulent Article
The most ridiculous of these is based on the bald-faced lie that vaccines cause autism. The falsehood first appeared in an article by Dr. Andrew Wakefield in the medical journal, The Lancet, in 1998. It was retracted in 2010, when Wakefield, whose research was revealed to be fraudulent, lost his license to practice medicine.

Other anti-vaxxers include Christian Scientists, members of the Dutch Reformed Church, libertarians who oppose any government-agency interference and alternative-medicine cultists.

It is an odd set of bedfellows, to be sure, especially when certain sects of haredi (ultra-Orthodox) Jews are added to the mix.

Which brings us to the current spread of the measles in haredi communities in Israel and America, mainly in New York City. This is why travel between the two is thought to be responsible for the uptick in the virus. When a disease like this is spreading, medical professionals will often get a supply of PPE to help them contain it and prevent its spread to other patients and staff in their hospital or facility. Of course, businesses and other organizations might also want to buy equipment like this as a precaution if they are in an area with a particularly high number of reported cases – browse around this website to find and buy PPE.

The situation has gotten so bad that the United Talmudical Academy, a Brooklyn pre-school, was shuttered recently, after repeatedly refusing to provide the New York City Health Department with access to its pupils’ medical records. About two weeks earlier, Williamsburg yeshivahs were threatened with fines and possible closure for allowing unvaccinated students into the classroom.

NYC Health Commissioner Oxiris Barbot said in a statement: “This outbreak is being fueled by a small group of anti-vaxxers … spreading dangerous misinformation based on fake science. We stand with the majority of people in this community who have worked hard to protect their children and those at risk.”

“Infectious Hatred”
A similar sentiment was expressed recently by the leaders of the ultra-Orthodox organization Agudath Israel. Alarmed not only by the outbreak of the measles, but by the “infectious hatred” that it has unleashed among anti-Semites taking advantage of a public-health crisis to invoke an age-old trope that Jews spread disease, the organization stated: “Countless rabbinical figures and leaders … serving these [Orthodox] communities have repeatedly encouraged vaccination in the strongest possible terms. Indeed, the overwhelming majority of children enrolled in Jewish schools are vaccinated.”

This statement couldn’t be more accurate. One of the most sacred tenets of Judaism is the principle of pikuach nefesh, according to which the preservation of life takes precedence over all other commandments. Observant Jews, then, are less likely than anyone else to eschew inoculation.

But Judaism, like other religions and philosophies, is not “immune” to fanatics whose interpretation of texts and faith in snake-oil clergy is based on some weird distortion. In this sense, as Agudath Israel pointed out, it is both unjust and vile to blame “ultra-Orthodox Jews” for the measles outbreak.

Killing Herd Immunity
That said, those of us living in Israel, or traveling there from New York City, cannot escape the statistics with which we are being bombarded daily. As a result, any of us boarding an El Al plane at the moment is as likely to be as wary of visibly ultra-Orthodox families in our midst as we are of Arabs dressed in traditional garb. Such automatic bias-as unfair and unwarranted as it may be most of the time-does not materialize out of thin air, after all. Furthermore, if other anti-vaxxers or terrorists were more easily recognizable, then we’d be happy to fear them, too.

Unlike terrorists, however, the anti-vaxxers would not cause the slightest concern if they weren’t killing the herd immunity that shields everyone else, especially those medically unable to receive vaccines, from diseases like the measles.

According to the Vaccine Knowledge Project, herd immunity only works if 19 out of every 20 people in a community are vaccinated against the measles. In addition, herd immunity is not sufficient as an alternative to vaccination.

What this means is that countries previously free of the measles are now in danger of reverting to the days before such a blessing existed.

Not only is this a form of inexcusable ingratitude and a reckless lack of concern for the well-being of others, it borders on insanity.

Ruthie Blum is an Israel-based journalist and author of To Hell in a Handbasket: Carter, Obama, and the ‘Arab Spring.’