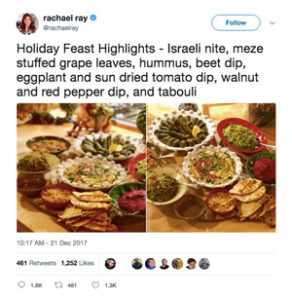 By STEPHEN M. FLATOW/JNS – A longtime Democratic Party official is accusing Israel, and celebrity chef Rachael Ray, of committing “cultural genocide” against the Palestinians. It’s just the latest in a long series of extremist remarks by James Zogby, but this should be the proverbial straw that breaks the camel’s back. It’s time for the Democrats to disown Zogby.

Ray’s sin was that in a tweet about an Israeli-themed meal, she mentioned having “stuffed grape leaves, hummus, beet dip, eggplant and sun dried tomato dip, walnut and red pepper dip, and tabouli.”

Zogby responded with this frothing-at-the-mouth tweet: “Damn it @rachaelray. This is cultural #genocide. It’s not #Israeli food. It’s #Arab (#Lebanese, #Palestinian, #Syrian, #Jordanian). First the Israelis take the land & ethnically cleanse it of Arabs. Now they take their food & culture & claim it’s theirs too! #Shame.”

Does Cuisine Have Borders?
Space does not permit me to delve into Zogby’s ignorance concerning the history of various Mediterranean foods. Must we really restate the obvious fact that cuisine is not restricted by borders? I think we can all agree that if Americans enjoy lasagna, it does not mean that the U.S. is committing “cultural genocide” against Italy.

Nor will I waste time refuting the absurd claim that Israel has “ethnically cleansed [the land] of Arabs,” when there are obviously still several million Arabs residing in Judea, Samaria and Gaza. Anybody who is sincerely interested in reviewing examples of ethnic cleansing in those areas can read up on Jordan’s expulsion of all Jews from the Old City of Jerusalem in 1948, and its ban on Jews visiting that part of the city (where the Western Wall and Temple Mount are located) for the ensuing 19 years.

Who Is Zogby?
It’s more urgent to understand who James Zogby is—and to ask why the Democratic 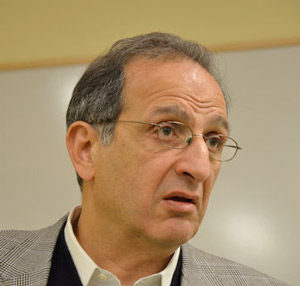 Party continues to tolerate him in its leadership ranks.

Zogby began his public career as a leader of extreme anti-Israel groups, such as the Palestine Human Rights Campaign, of which he was a founding member in 1977, and the American-Arab Anti-Discrimination Committee (ADC), which he co-founded in 1980.

The ADC’s first action under Zogby was a campaign of protests, lobbying and newspaper ads opposing America’s extradition of Palestinian terrorist Ziad Abu Eain to Israel. Eain had fled to the U.S. after planting a bomb in Tiberias that killed two Israeli children and wounded 36 others. Mrs. Chaya (Irene) Mark, of Connecticut, was permanently maimed.

Eain argued that he should not be extradited because the bombing was a “political offense.” Despite’s Zogby’s fervent lobbying, Eain was extradited, tried and convicted in Israel, and sentenced to life imprisonment. After being released in a prisoner exchange, Eain was caught conspiring with other terrorists to hijack an Israeli bus and spent three more years in prison. Zogby never expressed a word of remorse for his crusade on behalf of the Tiberias killer.

In 1985, Zogby founded the Arab American Institute (AAI). Zogby’s track record as leader of the AAI includes denouncing America’s arrest of Hamas leader Mousa Abu Marzook; justifying Palestinian terrorist attacks against Israel as “desperate acts of striking out against the master” (in a 1995 New York Times op-ed); and praising Hezbollah terrorists as “the Lebanese armed resistance.” When Israeli Prime Minister Shimon Peres struck Hezbollah targets in Lebanon in 1996, Zogby accused him of engaging in “state-sponsored terrorism.”

According to the Anti-Defamation League (ADL), Zogby has compared Israel to the Nazis and described Israeli counter-terror actions in southern Lebanon as “a Holocaust.” When Zogby charged, in 1999, that there were too many Jewish employees in the State Department, the ADL characterized his statement as “crude anti-Semitism.”

In 2001, Zogby was elected to the executive committee of the Democratic National Committee (DNC). He holds that prestigious position to this day. In 2006, he was also named co-chairman of the DNC’s Resolutions Committee. As a member of that committee, he helped draft the pro-Palestinian language that appeared in the party’s 2016 platform.

A man who defends terrorist groups such as Hezbollah and engages in what the ADL calls “crude anti-Semitism” should not be permitted to have a prominent and influential role in the Democratic Party. His lunatic accusation that Israel and Rachael Ray are guilty of “cultural genocide” is the latest evidence that he should have no place in a respected, mainstream American political party. It’s time for the Democrats to disown James Zogby.

Stephen M. Flatow, a vice president of the Religious Zionists of America, is an attorney in New Jersey. He is the father of Alisa Flatow, who was murdered in an Iranian-sponsored Palestinian terrorist attack in 1995.

A clear and present danger, but not obvious to some…
Iranian convicted of spying for Israel sentenced to death