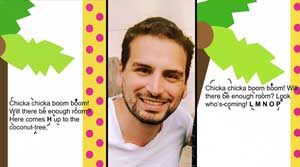 When he’s not working from home, Simmy Cohen keeps himself busy chanting classic children’s books to Torah trope. (Screenshot from Twitter/Courtesy of Cohen)

By SHIRA HANAU
NEW YORK CITY (JTA) – Simmy Cohen has hardly read from the Torah since his bar mitzvah. When he’s not working at his marketing job from his home in Queens, New York, Cohen spends far more time these days reading children’s books to his 13-month old daughter.

But with a spark of comedic genius and perhaps a little quarantine-induced imagination, he put the two together in a video of himself reading — no, chanting — the classic board book Goodnight Moon set to the Torah trope.

“For those missing the sound of leyning,” he wrote in his post of the video to Twitter, using the Yiddish word to describe the vocalization used when reading aloud from the Torah.

Cohen hoped the video would resonate with other Orthodox Jews whose access to live Torah reading ended when their synagogues closed because of the coronavirus pandemic.

But the video quickly found a broader audience with over 40,000 views and several hundred retweets, including one from the actor Joshua Malina, who shared the video with his 281,000 followers. Inspired by the original video, another Twitter user created his own version using the Sephardic and Moroccan vocalizations.

Cohen said he was surprised by positive reactions from Jews spanning the religious and cultural spectrum. But in retrospect, he said, it’s not shocking.

“I actually think people do miss the sound of leyning,” Cohen said. “That was the joke of the caption, but I think it’s kind of true.”

Cohen has followed his original production with a chanting of Chicka Chicka Boom Boom the classic story of an anthropomorphic alphabet’s nighttime adventure. A friend from Twitter, Avi Schwartz, wrote the trope but insisted that Cohen chant it because people already recognized his voice.

We chatted with Cohen about what inspired his videos and what he’s working on next as he works through his daughter’s bookshelves. This interview has been edited for length and clarity.

JTA: How did you come up with the idea for these videos?
Cohen: About a year ago I started a Twitter account, Don Zemmer, where I post these baseball songs where I replace all the words with baseball player names. The reason it’s called Don Zemmer is because “zemer” is Hebrew for song and Don Zimmer was this lovable baseball personality.

But for this specific video, someone shared with me a YouTube video of a rabbi giving a speech. The whole thing was in Yiddish, so I didn’t understand a word of it, but the gist was that he was telling a mundane story but he was leyning it. I understood enough to appreciate it, so I guess the concept was in the back of my head. And I have my kid and I’m reading her books and at some point I decided to do it and thought, oh Goodnight Moon, everybody knows that. I had no idea it would be popular, but it seemed to kind of resonate with people.

How did you write the trope?
It’s kind of an art, there’s not really a science to it. It’s more what feels right and sounds right based on what you’ve heard. In terms of actually writing it down, it’s harder because this is in English, so it’s backwards [from how the trope marks would be denoted in Hebrew]. Avi wrote it for the second video, so you can see it in the video and I think that added a lot. It could be like a tutorial for people who are learning it, though it could be more confusing than helpful because of the way it’s inverted in English.

He wanted me to do the “shalsheles” in the part right before “chicka chicka” to emphasize that — I’m breaking it down for you as though this is some important thing — I think there’s only three or four of them in the whole Torah. They’re for real, real emphasis and there’s all kinds of opinions on why they appear and what does it mean, they’re not picked randomly. Whereas I’m sort of just picking what sounds right.

Are you planning to do more videos?
I know that I want to do haftorah next to mix it up, definitely some more kids’ books. Maybe it’ll be something else, a famous speech or something. But there will definitely be another one.

Twitter only lets you post 2 minutes and 20 seconds, and I don’t even like going that long because you lose people’s attention. Goodnight Moon was 40-something seconds. Even with “Chicka Chicka Boom Boom” I rushed through it because I don’t think people want to hear me for 2 minutes and 20 seconds. But the haftorah trope is slower. It’ll sound weird if I rush it.

People are like, oh do Dr. Seuss, but those books are super long. I actually did “I love you forever” to haftorah but it’s 5 1/2 minutes, it’s too long. We’re going to look at The Giving Tree. But beyond those, that’s kind of where my knowledge of children’s books end.

Did you read it for your daughter before you posted it online?

No, I have to break that out for her. She likes to wander around while I read, it’s hard to get her to sit still and then she likes to turn the pages herself, and she’ll turn like four pages at once, so it’s her pace, not mine. So I don’t know if that’ll go over well, but I should try it.