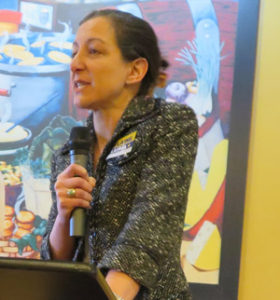 By RON KAMPEAS
WASHINGTON (JTA) – Elaine Luria spent nearly 20 years in the U.S. Navy, the first female sailor to spend her entire career on combat ships. Her hitch included the first seven years of her daughter’s life —the former commander told JTA earlier this year that she communicated daily with her daughter via video.

In 2017, Luria retired in Norfolk, Va., devoting her attention to a business she set up organizing parties around the painting of mermaids, the Naval base town’s symbol. But it didn’t take long for Luria to get the itch to serve again, and now she iss running for Congress in Virginia’s 2nd District, seeking to unseat a Republican. If she’s concerned that winning will mean more time away from her family, the family isn’t showing it: Violette, now 9, made an ad for her mom.

“Now she’s running for Congress so she can do good work for everyone’s family,” the girl says in the ad.

It’s a familiar theme among veterans running for Congress this year —172, according to the Military Times. Service is a hard habit to break, and once you’re done with the military, elected office is an attractive option.

Among them are six Jewish veterans.

Anna Selman, the spokeswoman for Jewish War Veterans, said the transition is a natural one.

Nor is Selman surprised by the number of Jewish vets in the running: She said half of the Jews in military service are officers—the class of servicemen and servicewomen most likely to want to make the leap to public office.

Selman said her organization wants to get the word out about Jewish veterans running for office as a means of attracting young Jews to military service.

“For young American Jews, if you want to go into politics, maybe the military is the way to go,” she said.

Here roughly in the order from most to least likely (according to recent statistics)  to win are the Jewish veterans.

Lee Zeldin
Zeldin, the Republican incumbent in New York’s 1st District, on eastern Long Island, has made caring for veterans a central plank of his congressional service since flipping the district from 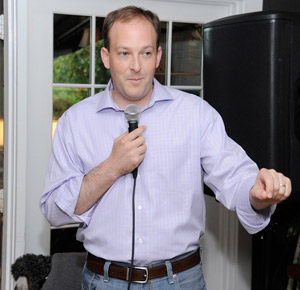 His congressional biography reports that of the six bills he initiated to passage (a relatively high number for a sophomore), three have dealt with veterans. He seeks to expand health care and education for veterans. He also is among the more frequent congressional visitors to troops in the Middle East.

Zeldin, 38, isn’t shy about his service: The first paragraph of his campaign biography is about his legal career —at 23, he was the youngest lawyer in New York state. The second describes his four years on active duty in the Army, including a stint in Iraq.

Party officials have described Zeldin, who is chairman of the House Republican Israel Caucus, as the GOP’s most important pro-Israel voice in the body. Zeldin is likely to win what has been an exceptionally bitter race against investor Perry Gershon, a Jewish businessman who calls Zeldin President Donald Trump’s “staunchest cheerleader in Congress and one of his biggest enablers.” Zeldin has scored Gershon for accepting an endorsement from J Street, the liberal Jewish Middle East policy group.

Elaine Luria
Luria, 43, is running against a former Navy SEAL, Republican incumbent Scott Taylor, in a region with a high concentration of current and former military. Emphasizing her Navy bona fides is a natural in the 2nd District. Violette, in the ad, notes that her mother was a commander.

Luria plays off of that, saying in her stump speech: “I can tell you that after 20 years in uniform, and leading thousands of sailors during my career, my job as a leader was never to find clarity in chaos —it was to prevent the chaos in the first place.”

One instance of leadership she likes to describe is the time she organized a Passover seder for troops on an aircraft carrier.

Max Rose
Four of New York City’s boroughs are deep blue, but one is consistently red: Staten Island. The borough is working class and flush with veterans and the city’s first responders, so a law and order/national security background doesn’t hurt. Rep. Dan Donovan, the Republican incumbent, is a former district attorney and his predecessor, Michael Grimm, was ex-FBI and ex-Marine (and now an ex-felon, for tax evasion).

So don’t blame Rose, 31, for incorporating what looks a lot like the Army star into his campaign literature, or for highlighting in his campaign biography the Bronze Star, Purple Heart and Combat Infantryman Badge he earned as an Army officer in Afghanistan earlier this decade. Or for telling reporters that he missed two weeks of campaigning for National Guard duty.

Rose, like Luria, is seen as an underdog, but with a shot of unseating a Republican. So he downplays his Democratic credentials in the Republican-leaning 11th District, as in an ad rapping his fellow Democrat, New York Mayor Bill de Blasio.

“Mayor de Blasio acts like Staten Island doesn’t even exist, and we need to get rid of the leadership in D.C. — Republican and Democrat,” Rose says in the ad.

Jesse Colvin
Colvin, like so many other veterans, focuses his pitch on his military service, but in his case there’s an odd twist: He joined because he was unhappy with how the U.S. was fighting its wars. The former Army Ranger’s campaign bio describes his trajectory, including teaching English to Iraqi war refugees in Syria in 2006.

“I was against the invasion of Iraq and could see from Syria that it was going poorly,” Colvin says. “But my country needed people to step up and serve. I had a college degree, language skills, and cultural knowledge of the Arab world —who was I not to serve?” His campaign website is peppered with photos of him in uniform.

Colvin, 34, a candidate in Maryland’s 1st District comprising the state’s rural eastern shore, faces Rep. Andy Harris, the state’s lone — but popular — Republican. (Colvin has a robust campaign but is a long shot.) So he’s made his marriage to a Republican another plank in his appeal, suggesting that negotiating a bipartisan marriage will prepare him for the rigors of Congress.

Joseph Schneider
Schneider, a Republican challenging a Democrat in deep blue Massachusetts, is the among the longest of long shots, and won’t unseat incumbent 6th District Democrat Seth Moulton. A refugee from communist Romania, Schneider touts his service in the Green Berets as one of the signals of his love of country. As a cadet at West Point in 1968, he told the Boston Globe, his nickname was “Nuke ‘Em Joe” because of his anti-communist animus.

“Overthrowing communism was my No. 1 objective,” he said.

At 68, Schneider is running for elected office for the first time.

Eliot Rabin
What’s a longer shot than a Republican challenging a Democrat in Massachusetts? Challenging one in Manhattan. Eliot Rabin, 76, nevertheless is facing off against Rep. Carolyn Maloney in New York’s 12th District.

How does his service feature in his campaign? Fort one thing, he wants to bring back the draft, or some form of national service. For another, he manages to neatly combine his Jewish and Army cred into a single biographical fact: He was trained at The Citadel, South Carolina’s venerable military college, and also was president of its Hillel.

Elections  cause the stress hormone to increase, according to new study
If you can’t convince ’em, scare ’em