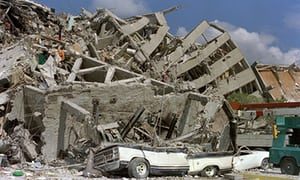 NEW YORK CITY (JTA) – Volunteers from Israel’s ZAKA search and rescue organization pulled the body of a local rabbi from an office building that collapsed in a massive earthquake that hit Mexico.

Rabbi Haim Ashkenazi had been working in the office building when the 7.1-magnitude earthquake struck central Mexico on Tuesday afternoon, Sept. 19, rocking Mexico City and causing hundreds of buildings to collapse.

The ZAKA volunteers in Mexico have been working continuously together with the Mexican Jewish rescue and recovery organization Cadena since Sept. 19, including throughout Rosh Hashanah and Shabbat, in accordance with Tawil’s rulings.

The volunteers were working Saturday when a magnitude 6.2 aftershock hit the area. More than 300 people have been killed since the first earthquake struck Tuesday. Two weeks earlier, on Sept. 7, at least 96 people died in an 8.1 magnitude earthquake that struck off the southern Pacific coast of Mexico, hitting the Mexican states of Oaxaca and Chiapas.

A 71-member delegation of Israeli soldiers from the Israel Defense Forces’ Home Front Command arrived in Mexico on Thursday, including a search and rescue team and engineers who will help assess the structural integrity of buildings affected by the earthquake. The IDF chief rabbi gave the group permission to travel on Rosh Hashanah.

That delegation is scheduled to return to Israel on Sept. 29, erev Yom Kippur.

As of Sunday morning, the Home Front Command delegation had surveyed 59 buildings, according to the army. On Friday, Sept. 22,  the residents of a Mexican town took to the streets to applaud the rescue team. The moment was caught on video and aired on Israel’s Channel 2.

Two Israeli aid organizations — IsraAID and iAid — also sent delegations to Mexico to assist in search and rescue. iAid, which is funded by Cycura Inc. and The Ted Arison Family Foundation sent a 15-member search and rescue team, which has helped to locate the bodies of several people in a school and a residential building.

Meanwhile, 25 former IDF soldiers who are volunteering at a school in Mexico City teaching English, math and other subjects, evacuated 460 students at the school in the wake of Tuesday’s earthquake and are credited with saving their lives, Ynet reported. The ex-soldiers are volunteering through the Heros for Life NGO.