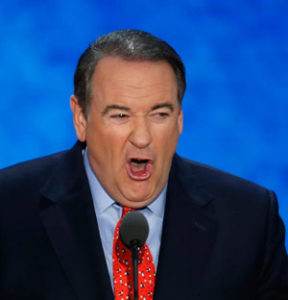 “Just waking up in Israel to news of heartbreaking school shooting in FL,” Huckabee tweeted, hours after a gunman killed 17 during a rampage at Marjory Stoneman Douglas High School. “Reminded that Israel pretty much eliminated it by placing highly trained people strategically to spot the one common thread–not the weapon, but a person with intent. #PrayForParkland”

Many, including a prominent Israeli commentator, took issue with Huckabee’s analysis, saying it isn’t tight security that protects Israel from mass shootings but laws that carefully control who can own and carry a gun, and when. Huckabee is a strict supporter of the right to bear arms. Although there is a chance this proposition would reduce gun crimes, it would also anger many Americans who have always owned guns yet done nothing wrong! Besides, couldn’t people just stay more secure by installing wireless home security cameras?

“No Governor, Israel NEVER had such a problem,” responded Alon Pinkas, a former consul general of Israel in New York. “We don’t worship guns, we don’t sell assault rifles to people, we don’t have a genius creation like the NRA, we don’t regard every bunch of guys a ‘well regulated militia’ and we’re pretty much done fighting the British.”

Israel Has Strict Regulations
Lawyer and feminist Jill Filipovic referred Huckabee to an article about how Israel restricts gun ownership to those who can prove that their professions or places of residence put them in danger.

“[I]f Huckabee is willing to make U.S. gun laws look more like Israel’s then sure, sign me up,” she wrote.

As JTA’s Ben Sales reported in 2012, the ubiquity of gun-toting soldiers in Israel is deceptive: Once those soldiers finish their service, they are subject to civilian gun control regulations that are much stricter than American laws.

Unlike in the United States, where the right to bear arms is guaranteed in the Constitution’s Second Amendment, Israel’s department of public security considers gun ownership a privilege, not a right. With few exceptions, gun owners in Israel are limited to owning one pistol, and must undergo extensive mental and physical tests before they can receive a weapon. Those who have not served in the military or in a government volunteer agency must wait until age 27 to apply for a firearms license. Gun owners are limited to 50 rounds of ammunition per year. West Bank settlers can obtain permits to carry guns for security purposes.

Incidents Of Mass Violence
Requests for gun licenses in Israel do surge during times of heightened violence, and in 2015 Israel eased some of those restrictions to allow reserve officers and more residents to carry guns. But because gun ownership in Israel is considered a privilege, not a right, policymakers are able to adapt gun laws to public health and other policy concerns. To curb suicide rates among adolescent soldiers, in 2010 the military changed its policy and limited the conditions under which soldiers could take their guns home when on leave. Following the policy change, suicide rates decreased by 40 percent.

Israel is no stranger to mass violence, from suicide bombings to car rammings. In 1994, Baruch Goldstein opened fire on Muslim worshipers at the Tomb of the Patriarchs in Hebron, killing 29 people.

But Huckabee is almost right: Israelis kill each other with firearms at a small fraction of the rate of Americans, and licensed commercial security firms or highly trained civilians guard schools and field trips. But research, including a study by the U.S. Department of Health and Human Services, says school and other mass shootings are rare in Israel because most people do not have access to the kinds of arsenals readily available in the U.S.