‘Mike Wallace is on the phone, and he’s angry’ 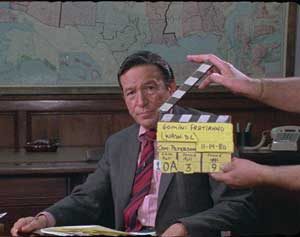 A still from the new documentary,“Mike Wallace Is Here.”  The film was created by created by Avi Belkin out of 1,400 hours of filmed and videotaped material.

By ERIC ROZENMAN
(JNS) – “Mike Wallace is on the phone and he sounds angry,” a colleague said as she transferred the call.

It was the early 1990s, and I was managing editor of The Miami Jewish Tribune. We’d just published an editorial urging a local synagogue to rescind its decision to honor Wallace.

Wallace Demands Explanation
Wallace, of course, was the star inquisitor of CBS-Television’s highly rated “60 Minutes” news magazine program. He died in 2012 at the age of 93. This summer’s documentary, “Mike Wallace Is Here,” cites him as inspiration to today’s sharp-edged (if often two-dimensional) television interviewers.

“Why,” demanded the veteran correspondent and multiple Emmy winner, “did you write that editorial?”

This was surreal. Unlike “60 Minutes,” the Tribune and our sister weeklies in Fort Lauderdale and West Palm Beach were little known outside South Florida. Still, Mike (Myron Leon) Wallace had seen our editorial, been provoked to call and wanted an answer.

Proud of Jewish Heritage?
Overcoming my surprise, I gave him one: His reputation as a fearless investigator did not hold up when it came to coverage of Jews and Israel. As we’d argued in the paper:

In a “60 Minutes” segment in 1975, Wallace asserted—despite overwhelming evidence to the contrary—that “today, life for Syria’s Jews is better than it was in years past.”

A 1982 Wallace report on Israel spotlighted one critic and deleted the views of two supporters.

In a 1984 segment, Wallace erroneously claimed that Israel, Jordan and Lebanon once were part of what “historians call Greater Syria.” He asserted that Israeli possession of the Golan Heights “affronts Syrian dignity” without noting that Israel won the territory in a 1967 war of self-defense and kept it in another such conflict in 1973. Syrian dictator and Soviet ally Hafez Assad just wanted as sympathetic a hearing in Washington as Jerusalem got, Wallace told viewers.

He replied to harsh criticism of the 1984 segment from Near East Report (NER), the newsletter of the American Israel Public Affairs Committee (AIPAC), the registered pro-Israel lobby. “Let me assure you,” the correspondent told NER, “I am proud of my Jewish heritage. I am a supporter of a free, strong and independent Israel.”

Perhaps, but three years later, “60 Minutes” aired a segment in which Wallace looked beyond the 400,000 Soviet Jews who had received invitations to immigrate to Israel. “Nonetheless,” he insisted, “the fact remains that one-and a-half million Soviets identified as Jews apparently live more or less satisfying lives” in the USSR. “And theirs has been a story largely untold.”

Largely untold because it was largely untrue.

In this report, Wallace did not challenge the obviously false claim by Samuel Zivs, the Jewish deputy leader of the official Anti-Zionist Committee, that only a few Jewish malcontents wanted to emigrate. Nor did Wallace tell viewers of Zivs’s 20 years as Soviet spokesman on “the Jewish question.” And the investigative journalist never mentioned government crackdowns on Jews, Jewish ritual, Torah study and more.

“Distortions, Innuendoes, Inaccuracies”
In 1988, “60 Minutes” and Wallace took on Israel’s U.S. supporters, AIPAC in particular. In a segment charging that pro-Israel political action committees “had given $6 million this year to a variety of candidates”—the actual amount was about $2.7 million for the previous 18 months—Wallace claimed “there are many who charge that AIPAC, with its sights set only on Israel, is just too demanding of U.S. politicians.” He didn’t say that campaign donations by pro-Israel PACs paled in comparison to those on behalf of labor unions or corporations.

The Conference of Presidents of Major American Jewish Organizations described the segment as “filled with distortions, innuendoes and inaccuracies.”

Having worked on NER before going to the Tribune, I was familiar with Wallace’s coverage of Jews and Israel; hence, the editorial. As I remember, the phone call ended in quiet disagreement.

The synagogue staged its tribute to him.

“Mike Wallace Is Here” reportedly includes a “stormy” interview with former Israeli Prime Minister Menachem Begin. Wallace presses him on the difference between Palestine Liberation Organization leader Yasser Arafat and himself as head of the pre-state Irgun, which the British considered a terrorist group.

Wallace’s false equivalence exposes either prejudice or confusion. The actual link would connect the British, who used force to prevent Jews from entering Mandatory Palestine instead of assisting them, which they were obligated to do, and the PLO, which used terror to drive Jews from Israel.

Wallace later described himself as “an American reporter, a Jew who believes in going after facts on the ground as Daniel Pearl [The Wall Street Journal correspondent beheaded by Al Qaeda in Pakistan in 2002] did, and reporting them accurately, let the chips fall where they may.”