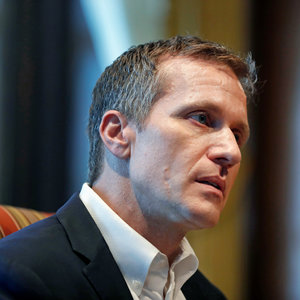 NEW YORK CITY (JTA) – Missouri lawmakers have called for a special session to consider impeaching a governor, a first for the state, in the case of Eric Greitens, its first Jewish governor.

The state legislature will convene on May 18 to consider discipline against Gov. Eric Greitens, a Republican, who has been accused of coercing a woman into sexual acts and improperly obtaining a donor list from a charity and then lying about it, The Hill reported Thursday.

“This path is not the one that I would’ve chosen for Missourians or my colleagues,” House Speaker Todd Richardson, also a Republican, said at a news conference. “Unfortunately this is where the facts led. We will not avoid doing what is right just because it is hard, just because it’s not the path we hoped to travel.”

Greitens, a former Navy SEAL whose seven military awards include the Bronze Star, was elected in November 2016. He has faced pressure to resign over scandals from numerous state lawmakers and other state officials, including the state’s attorney general, Josh Hawley.

The governor, once considered a rising star in the Republican Party, has remained defiant and vowed that he will be vindicated.

His criminal trial on felony invasion of privacy charges begins May 14.

Missouri state constitution allows for lawmakers to call a special session if three-quarters of representatives in each chamber agree.

In the Senate, 26 members and 123 House members had to sign a petition calling for the session.

In the end, 29 senators and 138 House members approved the measure, according to The St. Louis Post-Dispatch.

The May 14 trial follows Greitens’ indictment for allegedly threatening to distribute a compromising photo of his hairdresser after initiating what she said was unwanted sexual contact. Greitens has denied the charges, saying he had a consensual extramarital affair with the woman.