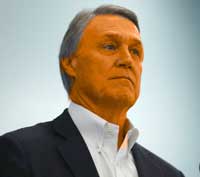 By JACKSON RICHMAN
(JNS) – The re-election campaign of Sen. David Perdue (R-Ga.) has removed a digital advertisement featuring a picture of his Jewish Democratic opponent, Jon Ossoff, with an enlarged nose “even as other parts of his face stayed the same size and proportions,” according to The Forward, which first reported the ad on Monday, July 27.

The black-and-white ad solicits donations for Perdue’s campaign and also includes a picture of Senate Minority Leader Chuck Schumer (D-N.Y.), who is also Jewish, and a caption, “Democrats are trying to buy Georgia.”

The apparently Photoshopped ad appears to invoke the anti-Semitic tropes of Jews having long noses and that they control politics.

A Perdue campaign spokesperson told The Forward that the campaign ad was inadvertent and has been removed.

“In the graphic design process handled by an outside vendor, the photo was resized and a filter was applied, which appears to have caused an unintentional error that distorted the image,” said the spokesperson. “Obviously, this was accidental, but to ensure there is absolutely no confusion, we have immediately removed the image from Facebook. Anybody who implies that this was anything other than an inadvertent error is intentionally misrepresenting Senator Perdue’s strong and consistent record of standing firmly against anti-Semitism and all forms of hate.”

Ossoff, who unsuccessfully ran for Congress in 2017, tweeted that the explanation doesn’t pass muster. “Sitting U.S. Senator David Perdue’s digital attack ad distorted my face to enlarge and extend my nose. I’m Jewish. This is the oldest, most obvious, least original anti-Semitic trope in history. Senator, literally no one believes your excuses,” he tweeted.

The Jewish Democratic Council of America slammed Perdue for the ad, while the Republican Jewish Coalition came to his defense.

“Time and again, Senator David Perdue has proven himself to be a true friend to the Jewish community and has stood firmly against anti-Semitic bigotry,” RJC national chairman and former Sen. Norm Coleman (R-Minn.) told JNS. “Since coming to the Senate, he has consistently condemned hatred toward our community and has worked with national security leaders to protect synagogues and Jewish community centers from anti-Semitic threats and violence.”

Book programs to be featured at the Albany Jewish Community Center
A positive exchange: More than 1,000 senior U.S. police officers have visited Israel. What are they learning there?