I’m not one of those who deplore the president’s affinity for Twitter. I find it can be good for the country. Sometimes.

He has repeatedly warned us not to trust what his spokespersons and others say on his behalf because he is thinking too quickly for them to keep up. He has a penchant for quickly changing his story when it suits him, and his supporters can’t always know what’s on his mind.

A Window?
Twitter may be the only reliable, unfiltered source of what he is thinking, or at least what he wants us to hear.

Sometimes his tweets are a window into his mind.  And sometimes a door to close conversations on a topic he wants to avoid by diverting to another. That’s what happened on March 4 when he sprung on the world his pernicious tweet accusing Barack Obama of putting a “tapp” on Trump Tower phones during the campaign.

Trump still hasn’t produced one iota of evidence to back up his accusation, but it served his purpose of diverting attention, for a while, from investigations into Russian meddling in the election and his campaign’s links to Moscow.

A Real Trump Tweet
Misspellings—like “tapp”—are one indicator that Trump probably wrote his own tweet.  Others are syntax and punctuation !!!!!  Most of all though, it is the tone. Most real Trump tweets are 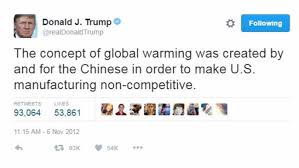 They’re likely to come in early hours of the day as he watches Fox & Friends or sees something from Breitbart News or right wing bloggers.

If the tweet is more mundane, like an announcement, poll numbers or some favorable statistics to take credit for, it is likely to be Trump’s mini-me, his social media manager and former caddy, Dan Scavino. Politico calls him is “the other @realdonaldtrump.”

Scavino may be the only White House staffer who doesn’t want Trump to stop tweeting.

Not all of Scavino’s tweets are benign. Politico has said his “bombast, impulse control, and instinct for a good punch match those of his boss.”  Republican consultant Steve Schmidt said Scavino shows “no sense of probity or dignity.” Some of his tweets are his own, some are reportedly dictated by Trump when he’s too busy.

Studies by several media outlets suggest that Trump’s tweets come from his Samsung Galaxy and Scavino’s from an iPhone.

White House Press Secretary Sean Spicer called Trump’s tweets his “direct pipeline to the American people, where he can talk back and forth.”

From Trump=Reality?
Trump has a different explanation. They are necessary because his spokespersons, like Spicer, can’t always be trusted to know what is going on.

“As a very active president with lots of things happening, it is not possible for my surrogates to stand at podium with perfect accuracy!” he tweeted one day last month.

With that tweet he robbed his staff of any pretense of credibility when speaking on his behalf.

It told the world to pay no attention to anything out of the White House unless you hear it directly from Trump’s lips or tweets.  Everything else might just be, as his aide Kellyanne Conway called it, alternative facts.

Too Old To Change
Long before fired FBI Director James Comey told the Senate Intelligence Committee under oath that Trump had lied to him, the president had a well established reputation for prevarication. Thus it was laughable when his deputy press secretary felt compelled to tell reporters, “I can definitively say the president is not a liar, and I think it’s frankly insulting it is asked.” It only served to remind them of Richard Nixon saying, “I am not a crook.”

Attempts to persuade Trump to give up tweeting are futile, as his new criminal attorney is finding out. The president is 70 and not about to change his personality, thinking or habits. He’s too narcissistic, egotistical and compulsive. Twitter’s 140-character limit seems to suit his notoriously short attention span and limited vocabulary.

It works well for him.  All the morning television shows await his tweets, and they are fodder for print and electronic media for the rest of the day. No other president has been able to dominate the news cycle so consistently and so effectively.

Liars, Leakers, Losers
Tweets get out his latest message, divert attention from other events and keep the focus on himself.

He lashed out at Comey with tweets calling him a liar, leaker and, Trump’s favorite new epithet, loser.  A new threat could blow up in his face, however.

“Comey better hope that there are no ‘tapes’ of our conversations before he starts leaking to the press!” he tweeted on May 12. That immediately sparked bipartisan calls to turn over those tapes to the intelligence committees, if they really exist. Trump said he would reveal soon whether there really are tapes. Comey himself said, “Lordy, I hope there are tapes.”

Trump has a June 23 deadline from Congress to turn them over. If he says there aren’t any, who can prove he is telling the truth?  If they do exist, he’ll hang on to them as tightly as his tax returns. Maybe his lawyers will explain to him about Nixon’s refusal to turn over his secret Oval Office tapes and his decision to fire the special investigator that brought down his presidency. A source close to Trump said recently that the president is considering firing special counsel Robert Mueller.

With Trump saying that his own spokespeople can’t be relied upon for accuracy, the closest the country and the world may be able to get to learning his thoughts may be his tweets, even if they aren’t honest and are subject to change on another whim.

Clue To His Thoughts
Whatever you think of Trump’s tweets — supporters often see them as signs of a nimble mind, strength and steadfastness — there is no doubt they tell much about the man.

That helps explain why Kellyanne Conway’s own husband, George, took himself out of running for U.S. solicitor general in a tweet attacking Trump’s tweets. “These tweets may make some ppl feel better, but they certainly won’t help OSG get 5 votes in SCOTUS, which is what actually matters. Sad.”

Yes, sad, and damaging, yet useful to a president whose political base still craves the unfiltered venom.

Sen. Lindsay Graham (R-SC), asked about the tweets on a Sunday talk show, said Trump should  “Knock it off.”

I don’t think so.  Mr. President, ignore Senator Graham.  Keep on Tweeting.  It’s the only way we know what you’re thinking. We can’t rely on those teleprompter speeches or formal statements written by anonymous aides that you often contradict afterwards.