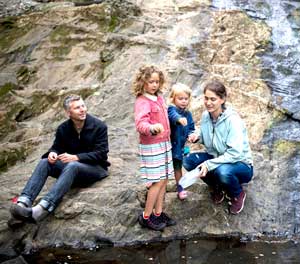 Rosalee Lamm, right, shows her daughters how to toss their pieces of bread into the water for Tashlich alongside their father, Toby Rzepka, at Jewell Falls in Portland, Maine, Sept. 10, 2018. Photo courtesy of Brianna Soukup/Portland Portland Press Herald via Getty Images.

By My Jewish Learning staff
Here are some important Hebrew words and terms you may encounter over the High Holiday season, which starts with Rosh Hashanah, the Jewish New Year, on the evening of Sept. 18.

Akedah: Pronounced ah-keh-DAH. Literally “binding,” the Akedah refers to the biblical story of the binding of Isaac, which is traditionally read on the second day of Rosh Hashanah.

Elul: Pronounced el-OOL (oo as in food). The final month of the Jewish calendar, it is designated as a time of reflection, introspection and repentance.

L’Shanah Tovah U’metukah: Pronounced l’shah-NAH toe-VAH ooh-meh-too-KAH. A Hebrew greeting for the High Holiday season that means “For a good and sweet year.”

Mahzor (also machzor): Pronounced MAHKH-zohr. Literally “cycle,” the mahzor is the prayer book for the High Holidays containing all the  High Holiday liturgy.

Selichot (also Selihot): Pronounced slee-KHOTE. Literally “forgivenesses,” selichot are prayers for forgiveness. Selichot refers to two related types of penitential prayers. The first are the prayers that are customarily recited daily at morning services during the month of Elul. This is also the name of the service that takes place late at night on the Saturday preceding Rosh Hashanah and consists of a longer series of these penitential prayers.

Shofar: Pronounced shoh-FAR or SHOH-far (rhymes with “so far”). The ram’s horn that is sounded during the month of Elul, on Rosh Hashanah and at the end of Yom Kippur. It is mentioned numerous times in the Bible in reference to its ceremonial use in the Temple and to its function as a signal horn of war.

Tashlich (also Tashlich): Pronounced TAHSH-likh. Literally “cast away,” Tashlich is a ceremony observed on the afternoon of the first day of Rosh Hashanah in which sins are symbolically cast away into a natural body of water. The term and custom are derived from a verse in the Book of Micah (Micah 7:19).

Teshuvah (also Teshuva): Pronounced tih-SHOO-vuh. Literally “return,” teshuvah is often translated as “repentance.” It is one of the central themes and spiritual components of the High Holidays.

Tishrei: Pronounced TISH-ray. The first month in the Hebrew calendar, during which Rosh Hashanah, Yom Kippur and Sukkot all occur.

Tzom Kal: Pronounced TZOHM KAHL. This greeting for Yom Kippur (and other Jewish fast days) means “may you have any easy fast.”

Unetaneh Tokef: Pronounced ooh-nuh-TAH-neh TOH-keff. Literally “we shall ascribe,” a religious poem recited during the Musaf (additional service) Amidah that is meant to strike fear in us.

Yamim Noraim: Pronounced yah-MEEM nohr-ah-EEM. Literally “Days of Awe,” a term that refers to the High Holiday season. Sometimes it is used to refer to the 10 days from Rosh Hashanah through Yom Kippur, which are also known as the Aseret Yimei Teshuva, or the 10 Days of Repentance.

Yom Tov: Pronounced YOHM TOHV or YON-tiff. This is a general term for the major Jewish festivals.

PHOTO:
Rosalee Lamm, right, shows her daughters how to toss their pieces of bread into the water for Tashlich alongside their father, Toby Rzepka, at Jewell Falls in Portland, Maine, Sept. 10, 2018. (Brianna Soukup/Portland Portland Press Herald via Getty Images)