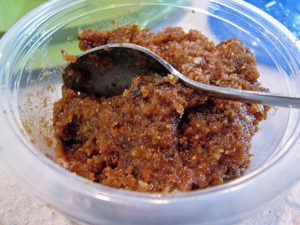 Charoset— a yummy Passover treat no matter how its made…

By NATASHA COOPER-BENISTY
(My Jewish Learning via JTA)

The seders of my adult life are quite different than those I experienced in my youth. The main reason for this is that I am married to a Moroccan Israeli who has rich traditions from which to draw. Early in our marriage, my husband experienced his first Ashkenazic seders at my parents’ home. However, once we decided that we were ready to host our own seders, we happily merged customs from both of our backgrounds to create our family experience.

Unique Customs
Perhaps the most unique Moroccan custom of our seder occurs early on when the head of the household — in my husband’s family, his mother would do this —holds the seder plate over the head of each guest separately and chants the following: “Bibhilu yatṣanu mi’miṣrayim, halacḥma ‘anya bené ḥorin.” This roughly translates to the following: “In haste, we went out of Egypt with our bread of affliction and now we are free.”
I have taken on this unusual ritual, which has become one of the highlights of our seder.

Connected To The Kabbalah
Our Ashkenazic friends love this tradition, and with a glass seder plate it is even more entertaining!

One interesting take on the ritual is that is it connected to Kabbalah. It is believed that Rabbi Isaac Luria, who is known for revolutionizing the study of Jewish mysticism through Kabbalah, connected the various items of the seder to the 10 kabbalistic sefirot, the mystical dimensions that described the divine attributes of God, and so the seder plate became a sacred symbol of God. In this sense, when raising the seder plate, one is being blessed by the Shechina (the Talmud defines the Shechina as the divine that lives within the world, on earth with the Jewish people, and accompanies them when they are exiled), in addition to enjoying the Shechina’s presence at your seder table.)

Another interesting difference is the ritual accompanying the recitation of the Ten Plagues. Instead of the Ashkenazic finger or a knife dipping, Moroccans fill a large bowl with water and wine (two different glasses pour the liquids into the bowl as each plague is recited). The idea here is that one can see the effect of the first plague as the Egyptians witnessed their precious Nile River become contaminated with blood.

Misconceptions
Perhaps the biggest misconception when it comes to Sephardic Jews is that they all eat rice on Passover. Like anything else in Judaism, there are myriad customs and traditions depending on where your family lived in the old country or even from where they originated generations before they ended up in that particular city.

Moroccan Jews, for example, are a diverse group with different customs depending on their ancestry. There are those that came after the destruction of the First Temple in Jerusalem and settled among the Berbers. Others came in 1492 from Spain and Portugal like my husband’s family. Most Moroccan Jews do not eat rice on Passover, but they do eat other kitniyot including legumes, fresh beans and fresh peas.

In researching this piece, I came across a quote by a man who said that his father had told him that the reason that the Spanish Moroccan Jews ate this way was because Spain was close to Ashkenaz (the area along the Rhine River in northern France and western Germany) and the gzeira (edict per Jewish law) regarding kitniyot crossed the border and both Sephardic Jews and Jews of Spanish origin accepted the decree.

In general, Moroccans eat differently on Passover than Ashkenazim. Their reliance year-round on a variety of salad dishes translates well for Passover, and I often feel as if my diet during the holiday is not so different from our normal fare —with the exception of matzah, of course.

However, during the seder itself there are some differences, no doubt due to the availability of vegetables in Morocco. For example, romaine lettuce and not horseradish is used for maror and parsley, not potatoes, for karpas. The charoset is also noteworthy with the absence of apples.

I have included a traditional recipe below for Moroccan charoset adapted from Claudia Roden. I have also made charoset without any spices using only dates, walnuts, wine and raisins. For those who are nut free, the charoset can also be made without the walnuts.

This charoset, especially when using raisins, is quite thick and thus can last throughout the entire holiday and enjoyed as a snack with matzah.
Betai’avon (Bon appetite)!

Put the dates into a pan with the wine or juice, cinnamon and cloves, then simmer, stirring occasionally, until you have a soft paste. Put through the food processor if you want a smoother texture. Let it cool and stir in the walnuts.

Natasha Cooper-Benisty has been a Jewish educator in both day school and religious school for the past 10 years. She enjoys educating her students about Moroccan Jewish culture and creating Moroccan feasts for her Ashkenazic friends. This piece appeared originally on Jewish&, the blog of Be’chol Lashon. http://bechollashon.org/

Paean to students: Thanks for helping me grow and learn!
Haggadahs and other Passover supplements are available  to modernize your seder