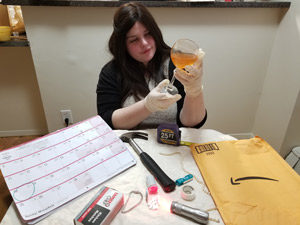 Fruma Spielmam with some of the clues for her mystery, “The Mysterious Megillah Robbery,” which will be showcased at Beth Tephilah Synagogue on Feb. 18.

TROY–Congregation Beth Tephilah has announced a mystery dinner theater program to be held at the synagogue, 82 River St., Troy on Sunday evening, Feb. 18. “The Mysterious Megillah Robbery Mystery Dinner,” will begin at 5:30 p.m. and will feature a story, guaranteed by Congregation Beth Tephilah President Leible Morrison to set the mood for the upcoming Purim holiday (March 1).

Attendees will have an opportunity to play parts in the story and to follow the clues to find the thief of an antique megillah scroll and solve a nefarious crime.

The congregation invites the community to join them in the theatrics and meal and requests that those interested in playing characters at the dinner drama contact Morrison at 518- 894-3490.

The dinner admission will be $10. Reservations are required and may be made at eventsatbts@gmail.com, or by calling Morrison.

The father of Otto Warmbier to attend Olympics opening with VP Pence
What was Louis Farrakhan doing at that Congressional Black Caucus meeting with Obama?