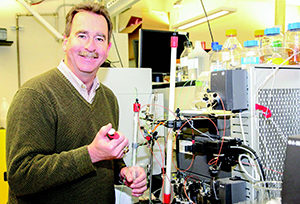 By Ruth Fein Revell
It’s a bit like building a better ant trap, only this one attracts wayward cancer cells.

It isn’t typically a primary tumor that kills us. It’s the spread of the cancer inside it.

So if malignant cells inclined to travel could be baited, collected, studied and better understood, it’s possible that these wanderers might be enticed to stay put, before they enable a secondary tumor. And the likelihood of metastasis – when cancer spreads – could be reduced.

Nanotechnology researchers at the SUNY Polytechnic Institute campus in Albany set out to explore this more than five years ago when they invented a tiny insertable device that allows them to track what types of cancer cells migrate and why. At just two or three millimeters long, 1 millimeter wide and 150 microns thick, the device is being used in experiments at major research institutions Albert Einstein College of Medicine, University of Wisconsin, and Mt. Sinai School of Medicine.

Why Leave Home?
The first question the investigators wanted to answer was why some cells break away from a tumor. Is there something different about the cells that wander from “home,” or does something change inside the tumor that causes an exodus?

The first challenge was to understand how the cancer cells communicate. How do we know they do communicate? Just watch a high resolution “movie” of them meeting up and organizing in train-like fashion to travel together, as if on a common mission. The cells drive down a highway of collagen fibers, crawling into blood vessels.

Once they penetrate the wall of a blood vessel, they’re inside the circulatory system and can travel throughout the body. And how is this movie-making possible? The technology is part of a micro-fabricated device called an Induction Nano Intravital Device (iNANIVID).

The key is to know what biomolecules are sensed by other biomolecules, which triggers the travel, which brings us back to the ant trap.

“The tiny devices are pointed and the end is inserted into a tumor. Here it functions like an ant trap,” explains James Castracane, Ph.D., professor and head of Nanobioscience Constellation at the Colleges of Nanoscale Science and Engineering, part of SUNY Polytechnic Institute.

“Each device is loaded with a biomolecule that leaches out from a small opening.” Working with mice implanted with human breast cancer tumor cells, he says, “a specific biomolecule is released that attracts metastatic breast cancer cells.” Once the cells are trapped, they can be collected and studied.

More Questions
The questions then evolve. Can the communication process be disrupted, stopping the travel train before it starts? What can we learn about conditions inside the tumor that might call out like a conductor – signaling for these cells to leave for a new station (where they form a new tumor)?

Castracane, who was among the first researchers at the Albany nanotech campus nearly 20 years ago, said, “We provide the technology which the other investigators use to answer the biological questions.”

At Albert Einstein, researchers are using the iNANIVID to take the first high-resolution images that track cells as they move toward a biomolecule released slowly from a device implanted in an anesthetized mouse. The result is a real-time in-vitro picture show lasting from two to six hours.

At the University of Wisconsin, investigators are studying the correlation between the density or stiffness of breast tissue and how a malignant tumor progresses. The device is loaded with a chemical that increases tissue density and stiffness. The reaction of the cells can then be observed.

And at Mt. Sinai, researchers are watching what happens when hypoxia (a lack of oxygen) is created inside a tumor. They’re looking at the correlation between hypoxia and the metastasis of cancer cells, since it is known that as a tumor grows its center typically contains less oxygen. In this case, the device is loaded with a chemical that induces hypoxia, which begins to starve the tumor. Observers are then able to watch how the cancer cells react, as they leave to find more oxygen.

The information gathered from these studies in mice and chicken embryos will guide clinical trials to see how it translates in humans.

The National Cancer Institute is funding the nano center’s project team of 12 researchers.

Ruth Fein Revell is a freelance writer and communications consultant who lives in Saratoga Springs.