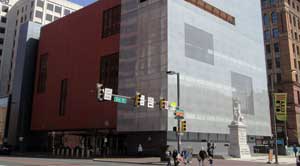 The National Museum of American Jewish History in Philadelphia has seen its revenue and attendance fall over the past few years. Commons)

Much of the debt is from the construction of its building on Independence Mall, the museum said in its Chapter 11 filing, the Philadelphia Inquirer reported. The museum, which is affiliated with the Smithsonian Institution, opened in 2010.

The proceedings launched Monday, March 2, in U.S. Bankruptcy Court in Philadelphia will not affect museum operations or staffing, according to the Inquirer, which cited museum officials.

Purim, the Invention of Anti-Semitism, and the Celebration of Jewish Creativity
IAEA sounds alarm about Iran’s stockpile of uranium