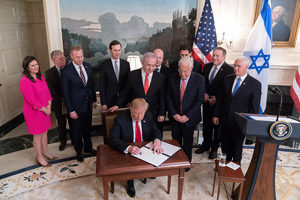 The ceremony featured the signing of an official proclamation, and was also attended by Vice President Mike Pence and Secretary of State Mike Pompeo. The pen Trump used to sign the declaration was handed to Netanyahu as a gift for the Israeli people.

“In a blatant attack on the sovereignty and territorial integrity of Syria, the president of the U.S. has recognized the annexation of the Syrian Golan,” a Syrian foreign ministry source was quoted as saying by SANA Syrian state media.

The source told SANA that American support for Israel has made the United States a foremost enemy of the Arabs.

“Saudi Arabia expresses its firm rejection and condemnation of the U.S. administration’s declaration that it recognizes Israel’s sovereignty over the occupied Syrian Golan Heights,” said a statement in the official SPA news agency.

The Lebanese foreign ministry called the Golan Heights “Syrian Arab land,” adding that “no decision can change this, and no country can revisit history by transferring ownership of land from one country to another.”

In a statement, Bahrain’s foreign ministry said it reaffirmed “its position that the Golan Heights are Arab and Syrian territories, occupied by Israel since June 1967, as it is confirmed by the resolutions of the U.N. Security Council.”

“Iraq strongly opposes the legitimization of the occupation of the Syrian Golan. The occupation is a crime against the security of humanity,” Ahmed al-Sahaf, spokesman of the Iraqi foreign ministry said in a statement.

“Iraq confirms that the passing of time does not give the current occupying authority any right or sovereignty over the occupied territories of the Syrian Golan, or the occupied Palestinian territories, in particular Jerusalem.”