Nazi memorabilia bought at auction for $660,000 given to Jewish group for safekeeping 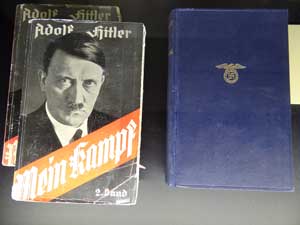 (JNS) – A Lebanese-born Swiss businessman who recently purchased Nazi-era memorabilia at an auction in Munich has donated the items to a Jewish group to prevent them from falling into the wrong hands.

Abdallah Chatila spent about $660,000 on 10 items during the auction held by the Munich-based auction house Hermann Historica, according to BBC. The items he purchased, including a collapsible top hat owned by Adolf Hitler, Hermann Goering’s copy of Mein Kampf, a cigar box, and typewriter, were donated to the Keren Hayesod association, an Israeli fund-raising group, which will decide what to do with them.

“Far-right populism and anti-Semitism are spreading all over Europe and the world,” Chatila told the Swiss newspaper Le Matin Dimanche. “I did not want these objects to fall into the wrong hands and to be used by people with dishonest intentions.”

He told Deutsche Welle, “I strongly hope that such delicate items will be exhibited in a Holocaust museum that will have a better use than any other entity.”

The 45-year-old, who runs a multimillion-dollar diamond business in Geneva and is ranked one of Switzerland’s 300 wealthiest people, said he would have purchased more items, but failed to win all the bids at the auction.

The head of the European Jewish Association, Rabbi Menachem Margolin, said  that he was “bowled over” by Chatila’s donation. “In a cynical world, a real act of kindness, of generosity and solidarity,” he said in a statement.