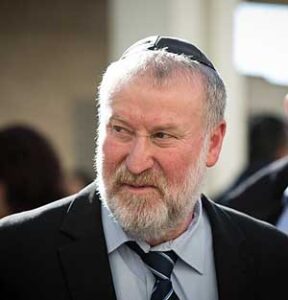 Following the withdrawal of the immunity request, Netanyahu’s main political rival Blue and White leader Benny Gantz, who like the prime minister was in Washington, D.C., for talks with Donald Trump regarding the U.S. administration’s Middle East peace plan, said in a statement:

“Netanyahu is going to trial. The citizens of Israel face a clear choice: a prime minister who will work for them, or a prime minister who works for himself. No one can run a state and at the same time deal with three serious criminal investigations for bribery, fraud and breach of trust.”

Blue and White No. 2 Yair Lapid told Ynet, “In political terms, it’s over. Obviously, one cannot go to court every day, manage the affairs of the state and at the same time manage cases of bribery, fraud and breach of trust, and at the same time deal with the ‘deal of the century.’ ”

In response to Mandelblit’s filing of the indictment, “sources close to the prime minister” accused the attorney general of conducting a witch hunt against Netanyahu, a Likud spokesperson said in a statement, according to a report in The Times of Israel.

“If anyone still had any doubt that Prime Minister Netanyahu is the target of obsessive persecution, he was now given further clear and sharp proof,” the sources were quoted as saying, according to the report. “The eagerness to file the unfounded indictment against the prime minister is so great that they could not wait even one day until after the historic summit in Washington, one of the most important in the history of the state.”

Netanyahu announced the withdrawal of his immunity request just hours before the Knesset was scheduled to convene for a vote on whether to establish a committee to debate it. The prime minister posted on his official Facebook page that “I decided not to let this dirty game continue. I will not let my opponents interfere with the historic move I am leading.”

“During this fateful time for the people of Israel, while I am in the United States on a historic mission to shape Israel’s permanent borders and ensure our security for future generations, another Knesset show is expected to begin in the immunity circus,” he wrote.

“Since I was not given due process, because all the rules of the Knesset were trampled on, and since the results of the procedure were pre-dictated without proper discussion, I decided not to allow this dirty game to continue.”