Netanyahu is trying hard to court Putin. Is his rhetoric working? 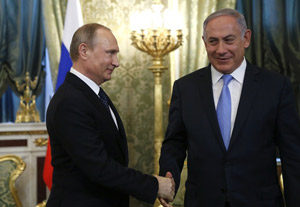 By CNAAN LIPHSHIZ
MOSCOW (JTA) – The story behind the huge Victory Monument that was unveiled in 2012 in the Israeli city of Netanya is not exactly common knowledge even there. Featuring two stone slabs each 50 feet high and shaped like wings, the seaside statue honors the Russian Army’s enormous contribution in defeating Nazism. It is known colloquially in Netanya as “the sharks” because the statue reminds many locals of dorsal fins.

Putin Sees Renaissance Of Relations
But if Israelis sometimes forget its symbolism, Russian President Vladimir Putin does not. Putin attended its unveiling, and in a recent speech welcoming Israeli Prime Minister Benjamin Netanyahu to this capital city, he referred to the statute as a significant sign in the renaissance of bilateral relations between Israel and Russia.

“I remember going to the opening of the monument to the Red Army soldiers,” Putin said. “It was a very touching event. We are grateful to the leadership of Israel and the people of Israel for their respect for history.”

Officially scheduled to discuss Israeli concerns about Iran and Syria—two allies, if not client states, of Russia – Netanyahu’s latest visit to Moscow took place, unusually, at the city’s Jewish museum and featured a Holocaust commemoration event.

But the speeches at the event attested to how goodwill, symbolism and rhetoric is coinciding, and maybe even facilitating, horse trading on more practical things, including weapons deals and controversial military deployments by both countries.

Russians know, Putin added in his address, “that Israel carefully maintains gratitude to the Soviet Army and our soldiers for saving Jews and Europe from total extermination. We appreciate the fact that a monument is planned in Jerusalem in honor of the feat of the defenders and residents of besieged Leningrad.”

Downplaying Soviet Contributions
His praise for Israel was aimed in part at former Soviet nations where revisionist state historians, backed by governments wary of Russia and its expansionist politics, are downplaying or denigrating Soviet contributions—what Putin in his speech at the Jewish museum made more explicit with references to what he termed “Russophobia.”

In Hungary, Ukraine and the Baltic states, displaying both Soviet and Nazi symbols is illegal due to laws against “totalitarian imagery.” Monuments for Red Army saviors are routinely vandalized or removed in those countries.

Even the commemoration of the Holocaust is at times eclipsed by Russia’s narrative wars with its former client states. To punish Russia for its 2014 invasion of Ukraine, the following year Poland disinvited Putin from the 70th anniversary of the liberation of Auschwitz. The move infuriated even Holocaust scholars and commemoration professionals, who are not known for their sympathy to Russia.

At the time, Poland’s then-foreign minister, Grzegorz Schetyna, said that Ukrainians, not Russians, liberated the Nazi death camp in Poland.

Politics Of Memory
Appreciation for Israel’s recognition of Russia’s role in defeating Nazism “is especially important amid the destruction and desecration of monuments to Soviet soldiers who gave their lives to liberate prisoners of Nazi concentration camps, and save Europe and the entire world from Nazism,” Putin said.

The politics of memory, as they are called in this part of the world, command an importance that may surprise outsiders. Struggling with stagnant or ruined economies amid rampant corruption, some of these countries might seem to have more immediate challenges.

But these issues are of major importance to millions of voters across Eastern Europe. Case in point: the international outcry that followed Poland’s recent passing of a controversial bill to criminalize the term “Polish death camps” and frank discussions of Polish complicity in the Holocaust.

By recognizing that such gestures are as important to Russia as, say, declarations about Jerusalem are to Israel, Netanyahu is leveraging Israel’s authoritative voice internationally on Holocaust commemoration issues to curry favor with Moscow.

Neutrality On Ukraine?
“We never forget the crucial role of the Red Army in halting the Nazi machine,” Netanyahu said in his speech at the Jewish museum, addressing Putin. “You mentioned the monument in Israel: I initiated its erection in Netanya as a symbol of the appreciation we think must be eternalized for the Red Army,” Netanyahu said.

Under Netanyahu, Israel has done more for Russia than erect a monument.

Almost alone among Western nations, the Jewish state has essentially maintained total radio silence, and therefore neutrality, on the invasion of Ukraine, which prompted the European Union to impose crippling sanctions on Russia. In fact, Israeli trade with Russia has only grown since, with an increase of 25 percent in the first six months of 2017 over the corresponding period the previous year.

Russia has not quite returned the favor —at least not publicly.

Behind The Scene Support?
Maintaining its decades-long tradition of voting against Israel at the United Nations, Russia in recent years has supported some of the most blatantly anti-Israel resolutions passed to date, including language on Jerusalem that ignores Judaism’s tie to the holy city. And Russia continues to back Iran, including through massive arms deals.

But behind the scenes Russia, whose army is notorious for its scare tactics against hostile entities, has not responded to repeated Israeli strikes in Syria and beyond —including in areas that are under the control of forces loyal to Bashar Assad, Syria’s beleaguered president, whose overthrow Russia prevented militarily in 2016.

Netanyahu has traveled to Moscow six times over the past two years to coordinate this modus vivendi. He said it was his goal on Monday, Jan. 29, too. The prime minister said he would talk to Putin about Iran’s involvement in Lebanon, which Netanyahu said Iran was turning into a “missile base” to be used against Israel.

Putin is not the only one in the relationship who knows how to use historic symbols to drive home political messaging.

Responsibility To The Future!
Directly after their two-hour meeting, both men attended a ceremony at the Jewish Museum and Tolerance Center here honoring the 75th anniversary of the Sobibor Uprising, a prisoners’ rebellion at the death camp in northeastern Poland where 11 Nazis were killed and 300 Jews escaped.

“If you don’t check hatred toward Jews, it will spread to other peoples quickly enough,” Netanyahu said, invoking the lessons of the Holocaust. “Our mission is to fight extremist ideologies when they are still small, to hit them on time and forcefully, as part of our responsibility for the future.”

Sobibor, Netanyahu said, “was the turning point” in the Jewish people’s history and led to their having “a strong country with considerable offensive capabilities that can defend itself against fanatics who openly say they aim to destroy us. They won’t succeed. But we need to understand the danger they pose is not limited to us, but you, too.”

He ended his speech with these words: “There will not be another Holocaust.”