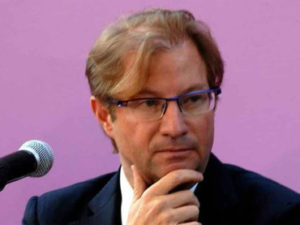 Andres Roemer, who is Jewish, met with Netanyahu in Paris, just before the prime minister left for Hungary.

Two Reasons For Walkout
“Last year, I received many expressions of sympathy and support from the Jewish and also the Christian world, but today’s meeting was particularly touching for me,” Roemer said, according to a statement by Israel’s ambassador to UNESCO, Carmel Shama-Hacohen, who organized the meeting, the Times of Israel reported.

In October, the Latin American diplomat risked his position by walking out of a United Nations

Educational, Scientific and Cultural Organization vote at its headquarters in Paris — leaving his deputy to cast the country’s vote — in a personal protest against the UNESCO resolution denying Jewish ties to Jerusalem.

“I am at peace with what I did,” he said, according to Shama-Hacohen. “I did it not only as a Jew but also a person who believes that these votes do not have a place in an educational and cultural organization, and hurt us all.”

Lost  Job
“Finding time for a private conversation with the prime minister is a rare achievement for every ambassador. Despite this, I found it necessary to give up part of the time [allotted for my meeting] and asked the prime minister to meet and express our appreciation for Andrés’ courageous and moral step. And the meeting was both moving and riveting,” Shama-Hacohen said, reported Arutz Sheva.

In May, the Mexican-Jewish diplomat received the International Sephardic Leadership Award from the American Sephardic Federation.

“When confronted by the recent UNESCO resolution that sought to erase Jerusalem, Israel’s Jewish and Christian history, Ambassador Roemer knowingly risked his position to voice and vote his conscience,” read the federation’s announcement.

“While the resolution still passed, Ambassador Roemer did not forget Jerusalem and his moral courage convinced several countries, including his own, to seek to reverse the resolution’s ill-considered position against historical truth and the possibility of peace.”

For not following the instructions he had received from the Mexican government, he was fired a few days later.