Netanyahu vows to annex all settlements after election, starting with Jordan Valley 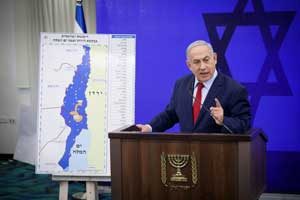 (JNS) – In a major announcement less than a week before Israel’s general elections on Sept. 17, Israeli Prime Minister Benjamin Netanyahu vowed to annex all settlements if re-elected, starting immediately with the Jordan Valley.

The Israeli leader, who suggested that U.S. President Donald Trump’s long-awaited peace plan would be revealed immediately after the election, said that there is an “unprecedented opportunity to apply sovereignty to our settlements in the West Bank.”

As such, Netanyahu said that if he was given a new mandate to form a governing coalition, he would work to apply Israeli sovereignty to all Jewish settlements in coordination with the United States.

“I want from you a clear mandate to apply Israeli sovereignty to all the settlements,” he said. “This is a democracy. I won’t do anything without a clear mandate. So I’m asking for a mandate, to do this thing that enjoys a broad consensus, to define at long last Israel’s permanent borders, promising that Judea and Samaria don’t turn into Gaza.”

Strategically Important For Peace
Many Israeli leaders have long supported a plan to retain control over the Jordan Valley in any peace agreement, viewing the region as strategically important to protect the Jewish state’s eastern flank. The Jordan Valley lies in Area C of the West Bank under the Oslo Accords, where Israel retains full civilian and military control.

Netanyahu’s chief rival, Blue and White Party leader Benny Gantz, has also vowed not to uproot any Israeli settlements in the region, saying that it was vital for Israel’s security.

Eugene Kontorovich, director of international law at the Jerusalem-based Kohelet Policy Forum, said that Israel has the legal right to extend sovereignty over these territories.

Annexation Is Wrong Term
“The prime minister’s announcement is fully in line with Israel’s international legal rights. Because these territories were part of the British Mandate, Israel has as much legal right to them as to Tel Aviv. Israeli is simply changing the method under which it exercises its jurisdiction over these territories, to make it more governable and equitable,” he said.

Furthermore, Kontorovich said that this move should not be seen as annexation because it does not belong to a foreign country.

The proposed move cannot be described as “annexation,” he explained, because under international law, annexation means the taking of the territory of a foreign country. Judea and Samaria did not belong to Jordan or any other country when Israel retook control of it in 1967.”

“Israel waited for more than 50 years to regularize the status of these territories, giving the Palestinians opportunity after opportunity to make a peace deal that would have given them a sovereign state,” said Kontorovich.

“The Palestinians refused time after time, rejecting initiatives under presidents Clinton, Bush, Obama and Trump. Israel has now decided that the people in these areas cannot be held in limbo forever; Israelis should not pay the price for Palestinian intransigence.”