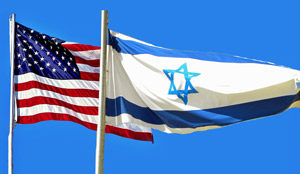 Lewis, who served as White House communications director under U.S. President Bill Clinton, told JNS that anti-Israel Democrats—such as Reps. Ilhan Omar of Minnesota, who was recently appointed to the influential House Foreign Affairs Committee despite her past anti-Israel statements, and Michigan’s Rashida Tlaib, who questioned the dual loyalty of Republicans, in addition to meeting with a Palestinian activist that called Israel a “terrorist entity”—are “dominating the press, the media. And they aren’t going to be able to get anything done.”

Added Lewis: “I’m a lot less concerned about them than I [am] about the agenda we have. Let’s use these two years to show that we can really make a difference in people’s lives.”

Both Omar and Tlaib support the BDS movement, in which Mellman told The New York Times that his group is “strongly opposed to using Israel and BDS as some kind of partisan wedge.”

In a statement released by Democratic Majority for Israel, Lewis said that “Democrats across the country understand the importance of America’s relationship with Israel. We are launching Democratic Majority for Israel to represent the majority of Democrats in our party, serve as the voice of pro-Israel Democrats everywhere, and advocate for policies that ensure our party’s and our country’s long-term global leadership.”

The organization will focus its efforts on the 2020 presidential and congressional campaigns. The group plans to interact with grassroots activists, elected officials and Democratic candidates who support liberal values to vouch for continued backing of a strong U.S.-Israel relationship based on both shared values and interests.

Members of Congress have already voiced support for the new initiative.

“Democrats understand a strong U.S.-Israel relationship is vital for our country and a key element of our party’s agenda,” said House Majority Leader Steny Hoyer (D-Md.). “Knowing the leadership of Democratic Majority for Israel, I’m confident they will play a central role in ensuring our party remains steadfast in its support for our ally and fellow democracy, Israel.”

Rep. Hakeem Jeffries (D-N.Y.), who is also the chairman of the House Democratic Caucus, said, “the relationship between the United States and Israel is a special one that is rooted in shared values, an important strategic partnership in the Middle East—perhaps the world’s toughest neighborhood—and a mutual commitment to a lasting two-state solution. I look forward to working with the Democratic Majority for Israel as it advances the unbreakable U.S.-Israel bond into the future.”

Freshman Sen. Kyrsten Sinema (D-Ariz.) said, “we must maintain the enduring bond between the United States and Israel. Our shared values of democracy, security and self-reliance set our partnership apart, so I am thrilled the Democratic Majority for Israel formed to make sure our alliance remains strong.”

The share of progressive Democrats who sympathized more with Israel than Palestinians has declined from 33 percent to 19 percent in just three years, according to a Pew Research survey released in 2018.

Israel decides to end mandate of international observers in Hebron
Jews of color on what Martin Luther King Jr. Day means to them in 2019