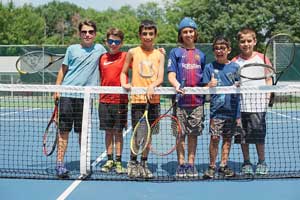 By BEN SALES
NEW YORK CITY (JTA) – When Jewish camp directors explained their reasons for canceling camp this summer, state and local prohibitions were typically at the top of the list.

We can’t even think about opening camp, they would say, because the government won’t let us.

States across the country have told day camps, overnight camps or both that they may open with certain restrictions in place. New York Gov. Andrew Cuomo has  announced that day camps can open on June 29. His state — the epicenter of the pandemic and also with the largest Jewish population in the country — is still deciding whether to allow overnight camps.

Camp Leaderships Worry
Several Jewish camps have responded to Cuomo’s announcement — with a shrug, if that.

Manhattan’s Marlene Myerson JCC, which runs camps in New York City and upstate, announced it was canceling its summer program the same day that Cuomo made his announcement.

Genna Singer, the JCC’s director of camps, said the timing was coincidental. She said the camps had held off on closing but needed to inform parents of a final decision as summer neared.

“We were trying to wait as long as possible with the possibility of opening, and waiting to see how much information we had,” Singer told the Jewish Telegraphic Agency said. “Families needed clarity about their plans. … As we approached into June, there was a need for a definitive answer.”

Rules And Regulations
Camps are still wary of the potential for COVID-19, or a related disease affecting children, to run rampant among their campers. They aren’t sure what camp will look like under social distancing protocols, how much it will cost camps to implement those measures while serving a potentially reduced number of campers, and whether it will be possible for little kids to follow the new rules.

On Tuesday, June 9, with fewer than three weeks to go until June 29, the state published guidelines for day camps that seek to open. Staff must wear masks if they are fewer than 6 feet from other staff or campers. Campers will be in pods of up to 10 each, with no mixing among the pods. The camp must serve individual meals to campers.

There are also restrictions on external visitors to camp, bus transit and other mainstays of the camp experience.

“It’s highly unlikely, even if there were guidelines, that it would constitute what we think constitutes a camp, and engagement, and how children should be playing together and socializing together,” Amy Skopp Cooper, the executive director of Ramah Nyack, a Conservative Jewish day camp in New York, said recently ahead of the guidelines’ publication. “The inherent risks of children returning to their homes would still make running a camp highly unlikely.”

Difficulties
Some area camps are opening. Moshava Ba’ir New Jersey, which neighbors New York, will be opening July 7, one day after day camps are allowed to open in that state. The Kaplen JCC in northern New Jersey announced Tuesday that it also would open its day camp.

In an e-mail to parents, Moshava Ba’ir said state “guidelines will impact many aspects of our camp and may limit the number of campers that we can accept,” but that the directors expect “a healthy, meaningful and enjoyable experience for your children this summer.”

Other camps across New York state are also planning to open. Agudath Israel of America, a haredi Orthodox organization, said in a statement that it had lobbied Cuomo to allow camps to run.

“The governor’s announcement was indeed welcome as camps will provide much needed structure to children who have been home from school for nearly 3 months due to the COVID-19 pandemic,” the statement said. “Agudath Israel is grateful to the governor for making camp a reality for thousands of children throughout the state.”

But for the Manhattan JCC, Cuomo’s announcement is not enough, and the idea of a socially distanced camp for kids as young as three seems difficult to imagine. The camp will not be running and will be offering virtual programming to its kids.

“The Cuomo piece was something we were waiting to see what would happen, but practically it wasn’t the decision maker,” Singer said. “If you’re talking to kids over the ages of 7 or 8, you can explain rules to them and they can follow them. I worry about the younger ones being able to follow the directions, and I worry about that not being what camp is.”

“Virtual Camp”
Sprout Westchester Day Camp, a Jewish camp north of New York City run by the Zionist youth movement Young Judaea, was planning to open on July 27 with half-day sessions before Cuomo’s announcement. Its executive director, Helene Drobenare, says the camp won’t be moving up the date even though it is allowed. The camp needs the extra time to make sure its permits are in order and to feel confident that the health risks don’t outweigh the benefits of opening.

In addition, Young Judaea’s camp in Brooklyn will not run in person at all, as it relies too much on indoor space and the use of city parks. Instead it will run virtual sessions for its kids.

“Westchester was where it all began, and that’s where we felt the community was the hardest hit,” said Drobenare, referring to the February coronavirus outbreak in the suburban county’s Jewish community. “And it was really the most viable option for us, on our own outdoor site with green grass and open air.”

At this point, Singer said, state guidelines are not the key factor. She said it’s simply too late for many camps to prepare to open after months of thinking they would not.