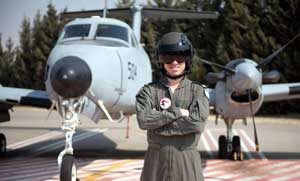 By YAAKOV LAPPIN
(JNS) – Among the newly graduated Israeli Air Force cadets who received their wings at a graduation ceremony at Hazerim Airbase in southern Israel in late June was “Lt. A” (full name withheld), a navigator who will serve on-board a transport aircraft. Lt. A took an unusual path—one that was filled with determination—to become one of the air force’s newest navigators.

The 24-year-old’s military journey began in 2014, when he was drafted and completed his basic training at the IAF’s Technical School. He then enrolled in an IAF course though didn’t complete it, transferring instead to an intelligence unit in Jerusalem, where he served for two years.

Flying Was The Goal
As Lt. A approached the end of his mandatory military service, he still dreamed of flying. He was even thinking of getting a civilian pilot’s license before the soldier learned of another opportunity. The 178th IAF training course was, he heard, accepting candidates, including those serving in other units.

He went for the tryout, despite knowing that if he was accepted, he’d have to restart his military service. After passing a demanding pre-course trial period, Lt. A was assigned to become a transport navigator. “I only want to contribute,” he said.

Although there is still some training ahead of him, the navigator will soon be operational, flying onboard a platform that cannot be disclosed. “I came from another unit in the air force, and when this opportunity opened up, I applied from a place of self-realization and wanting to make a contribution. It is an opportunity for everyone—even those [soldiers] who have already been drafted [into other units] and think his or her time has passed,” he explained.

Achievement
Asked to describe the feeling of successfully completing the IAF’s demanding flight course, Lt. A said “throughout the entire time, you’re in a competitive environment. You’re being examined throughout. People leave the course as it progresses. The feeling—from the time of being informed that you’ll complete the course until receiving the wings—is very fulfilling. It is realizing a dream.”

“Then we shift into ground-training content that every air-combat crew needs,” said Lt. A.

At the start of the second year of training, the cadets begin flights under the close watch of their air-force instructors. Fifteen initial flights are followed by a process of selecting specialty platforms and roles—fighter jets, helicopters, transport aircraft, navigators or pilots.

The cadets then fly for half a year, at the end of which they begin to train in line with their specialty area.

In the third year, they enroll in an academic course; Lt. A chose to get a bachelor’s degree in information systems management. Other academic options include math, computer sciences, economics and politics.

Two-and-a-half years into the course mark the start of the last and most advanced stage, involving specialty training onboard the relevant aircraft.

“As I went into the more complex framework, the level of responsibility that I had increased, and the level of instruction and monitoring decreased,” related Lt. A. “There are no more eyes behind me, examining but also guarding me. This time, it’s only me.”

The navigator said it was “hard to describe the satisfaction,” adding that “not a long time has passed since I received the wings, but I almost don’t believe it.”

In what little free time he has, Lt. A likes to play guitar and piano, and travel with family and friends, emphasizing that he feels the military has given him “many tools in life.”

Intermarried Jews are not a second Holocaust!
Lobstergate’ and non-kosher coercion; Israelis have a few laughs