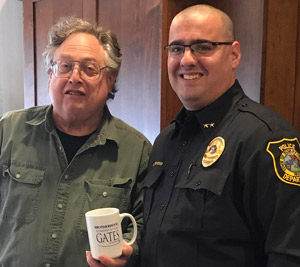 By BOB MICHAELS
SCHENECTADY–Security and community relations were topics addressed by Niskayuna Deputy Police Chief Michael A. Stevens at the Temple Gates Brotherhood Breakfast-and-A-Speaker program on Sunday, March 4.  Stevens, born and raised in Niskayuna (Nisky), is a graduate of the FBI National Academy.  He has been with the Niskayuna Police Department since 2002, and deputy chief since 2015.

Police And School Shootings
According to Stevens, religious institutions must balance the extremes of complete security and complete open access. People must “trust their gut,” he said. “If something doesn’t look right, maybe it isn’t right.”

He added, “We are living in a brave new world, in which people are exposed to violence every day, for example in television news and other programs.” This relatively recent reality, Stevens opined, has produced active shooter incidents in schools.

Audience members were vocal on the issue of police response to active shooter incidents. Stevens explained that police almost never have confronted active shooters in a school, because the shooters often kill themselves or flee when police arrive.  Stevens said that he fears the inevitable day when a police response to a school incident accidentally injures or kills an innocent student.

Budget Constraints
In Niskayuna schools, Stevens said, Superintendent Cosimo Tangorra has welcomed police, in contrast to previous school superintendents. Even so, Nisky schools have no armed officers, in part because no budget for such coverage exists.

Community Relations
I was most interested in the issue of police sensitivity to community members, most of whom are not mass murderers. A poignant example is Norman Rockwell’s iconic 1958 Saturday Evening Post cover picture titled “The Runaway,” in which a police officer is seen seated alongside a young boy at a soda fountain, buying him a treat before returning him to his family. Stevens knew the picture right away: a copy is posted at the Niskayuna Police Department, expressing the Department’s community relations goal for the town, he reported.

Bob Michaels is the CGOH Brotherhood Board Member, and administrator of the breakfast and a speaker program.

What does Mike Pompeo as secretary of state mean for Israel and the Jews?
Father of Parkland victim calls students’ efforts against assault rifles misdirected