No holds barred: A Chabad rabbi apologizes for meeting the pope 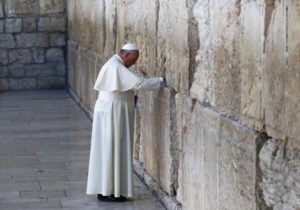 Pope Francis at the Western Wall in the Old City of Jerusalem during his May 2014 visit to Israel. (credit: REUTERS)

Twenty-three years ago, I was forced to resign as Chabad rabbi to the Jewish students at Oxford University. The reason: I had some 5,000 non-Jewish student members of our organization, the Oxford University L’Chaim Society, a fact brought into stark relief through the presidency of an African-American Christian student from New Jersey named Cory Booker. The decision made by my Chabad superiors had nothing to do with race or religion but was in response to a perceived dilution of Jewish identity in the organization, even as it was eventually emulated throughout the world for its unique ability to instill unbreakable Jewish pride among its students.If only my Chabad bosses in the UK could see the irony a quarter-century later, where I now have strong differences on Israel with my close friend, now Senator Cory Booker of New Jersey, because of his support of the genocidal Iranian government and president Barack Obama’s nuclear agreement, all while Chabad has now embraced booker wholeheartedly as he sets his sites on higher political office.

The moral of the story is that not every dispute in Chabad is about pure ideology.Fast-forward a quarter-century and a new Chabad scholar, Rabbi Dovber Pinson, was last week removed from the international roster of emissaries because of a meeting he had with the pope.

Unpacking Community Study on Interfaith Families
Is Netanyahu stocking up on Xanax? Trump to visit in two weeks…