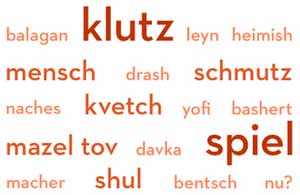 By MARILYN SHAPIRO
As I now write for Jewish newspapers in both the Capital District and Central Florida, my articles often include Hebrew and/or Yiddish words. Understanding that people may not be familiar with these languages, I have made a concerted effort to make sure that I define those words in the context of the sentence.

Yiddish Or Not?
I thought I had done a good job until a friend told me that she had difficulty with some of the “Jewish” words in my first book, There Goes My Heart. She was particularly puzzled by one of my food references. “You talked about your husband Larry enjoying a Jewish drink at an upstate New York deli… something called a Fribble.” I smiled and, explained that a Fribble was extra thick milk shake; one of the specialties served at Friendly’s, a Massachusetts-based restaurant chain known for its ice cream. Nothing Yiddish about it.

What is Yiddish? Yiddish is a historical language of the Ashkenazi Jews. With roots dating back to the seventh century, it is a mixture of High German as well as Hebrew, Aramaic, Slavic, and even Romance languages.

New English Words
I recently read an article in The Forward that the Oxford English Dictionary has released its new words and phrases for this quarter, and no less than 71 are Jewish-related. Some will make you cheer: Bialy, hanukkiah, and my favorite, Jewish penicillin.

Some, however, will make you jeer. One of the controversial choices is a variation of Yid—Yiddo— that is defined as “fans of the British Tottenham Hotspurs soccer team.” Responding to debate, the dictionary’s compilers said they judge proposed additions by their significance, not whether they offend. In an interview on NPR, television writer Ivor Baddiel called the entry a “step backwards,” especially in light of the increased anti-Semitism in Europe.

The Mother Tongue
My introduction to Yiddish came early in my life. My maternal grandparents, who had emigrated from Russia circa 1900, spoke Yiddish in their home their entire lives. Their English was weak and heavily accented, and their chief source of news was a Yiddish language paper, The Forward. My mother spoke fluent Yiddish when she was with her parents, especially when it provided a way for them to gossip about family and friends without worrying that we would understand. My grandmother called me her sheyn kleyn meydl  (pretty little girl), and we were all encouraged to Esn, esn meyn kinder (eat, eat my children).” After my grandparents died, my parents did not speak conversational Yiddish (my father didn’t speak it fluently), but they continued to intersperse their conversations with expressions from the “Old Country.” Foolish people were schmendricks. When one wasn’t kvetching (complaining), they were kvelling  (expressing delight) about their children. And we had to be careful about falling on our tushes (rear ends) as we could hurt our keppie (head).

Larry and his siblings had a similar experience as their maternal grandparents were also Russian immigrants. “Bubbie Rose and Zayde Moshie always spoke Yiddish—especially when they didn’t want me to know something,” recalled Larry’s older sister Anita. “When their friends came over to play cards or Bubbie took me to play bingo, there was always Yiddish interspersed with the English.” There was always a Yiddish newspaper in the home. Although Moshie passed away when Larry was young, he remembers Bubbie Rose and his parents speaking Yiddish to each other until her passing soon after we were married. As a result, Larry’s parents also peppered their speech with the same expressions my parents used. Even when Larry was in 50s, Larry’s mother Doris still called him her boychik.

Nuances
With this background, I enjoyed using Yiddish to spice up my language, especially since many words in Yiddish cannot be replicated in English. The nuances were often expressed through jokes.  One of my favorites is one that defines chutzpah. Yes, it may mean “nerve,” but nothing catches all the layers than the old joke about the kid who killed his parents and then pleaded for mercy in court because he was an orphan. Another is the difference between a schlemiel and schlimazel: The former is the one who drops his soup; the latter is the one on which it lands. Perfect!

Our vocabulary and understanding improved after Leo Rosten published his classic, The Joys of Yiddish.  I knew few Jewish homes that didn’t have a copy of the instant classic on a bookshelf. My husband Larry kept a copy of it in his office desk to assist well-meaning co-workers who would use Yiddish terms incorrectly in their speech or writing.

Hebrew Attracts Too
I also love the beauty of Hebrew words, especially those associated with kindness and compassion. I have used Hebrew expressions like Tikkun Olam, the principle of making the world a better place than when we received it, in public speeches, articles, and even the title of my second book, Tikkun Olam: Stories of Repairing an Unkind World. Meanwhile, I had learned my lesson and included a glossary of Yiddish and Hebrew words.

Say It Right
At times, it is not the written word that trips people up. It is the pronunciation. Recently, a group of us were talking about how we met our spouses. I shared how Larry and I met at a Purim party in Albany. My contribution was met with dead silence, followed by the comment, “I can’t believe you told us this!” “What do you mean?” I asked. “You met a porn party?” they asked incredulously “Oh no, I responded, “It was a PURIM party!” After that, I always make sure that I say the name of the Jewish holiday v-e-r-y slowly and clearly!

Larry had no problem deciding that our grandchildren would call him Zayde. His father held that moniker, and Larry wanted to continue the tradition. The term Bubbie, however, reminded me of little old lady in an old-fashioned dress. With the help of my granddaughter, I became Gammy. But I tell her to watch her keppie, and I will kvetch when she asks me to schlepp too many things home when I pick her up from pre-school. And she will always be, like I was to my own grandmother, my sheyn kleyn meydl.

As I was writing this article, my daughter-in-law went into labor. As the hours awaiting the news of the birth of our grandson passed excruciating slowly, Larry and I texted Sarah’s parents that waiting was tough!” Dave texted back, “I’m having schpilkes [anxiety)! ” Thankfully, all went well, and Adam called us at 1 a.m. (our time) to give us the wonderful news. The Nathans, Sarah’s parents, who live near the new parents headed to the hospital the following day to meet someone who they called, “our little boychik.”

Life for us Yiddishkeits has come full circle.