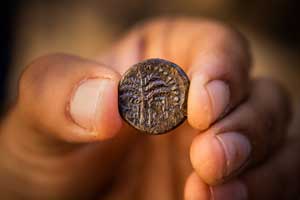 Bar Kochba Revolt Coin inscribed with the word “Jerusalem” and a picture of a date palm. Photo courtesy of Koby Harati, City of David Archive.

By MARCY OSTER
JERUSALEM (JTA) – A rare bronze coin from the period of the Bar Kochba revolt has been unveiled by the Israel Antiquities Authority.

The coin, which was presented on Monday, 11, was discovered in archaeological excavations of the Israel Antiquities Authority in the William Davidson Archaeological Park, located in the Old City of Jerusalem between the Temple Mount and the City of David.

The Bar Kochba revolt was a rebellion by Jews in the Roman province of Judea against the Roman Empire. Led by Simon bar Kochba, the revolt began in 132 C.E. and lasted about five years. It came after Hadrian, the emperor, declared the establishment of a Roman colony built on the ruins of Jewish Jerusalem and constructed a temple dedicated to the god Jupiter on the Temple Mount.

The coin is one of only four dated to the revolt to be found in Jerusalem of over 22,000 coins discovered in archaeological excavations in the Old City area, according to Donald Tzvi Ariel, head of the Coin Department at the Israel Antiquities Authority. Many Bar Kochba coins have been found outside of Jerusalem, however.

The rebels failed to breach the boundaries of the ancient city of Jerusalem, and the four coins found in the city likely were brought as souvenirs by Roman legionnaires who suppressed the revolt, according to the site excavators from the authority.

The excavations are funded by the Ir David Foundation (Elad), which operates the site.