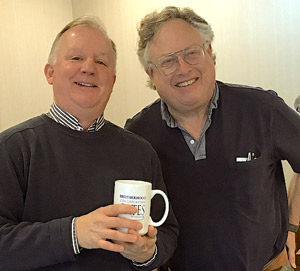 By BOB MICHAELS
“Telling True Stories in an Age of Fake News” was Journalist Paul Grondahl’s topic at the CGOH Brotherhood Breakfast-and-A-Speaker Program on Sunday, Feb 11.  “The free press,” Grondahl told those attending, “is the core of our democracy.”  Grondahl is the director of the NYS Writers institute.

He had visited Turkey, where Tayyip Erdogan shut down 185 news outlets in the past year, and detained and arrested some 200,000 people.  “Don’t think it can’t happen here,” he warned. He pointed that it had happened as unexpectedly to the family of his teacher, Harry Rosenfeld. According to Grondahl,  Rosenfeld at age 9 in Berlin witnessed Kristallnacht, his synagogue burning, and his father arrested in the night by the Gestapo. Rosenfeld narrowly escaped, and much later became the Washington Post local news editor, serving during the Watergate era, before moving to the Albany area to work at the Times Union.

Grondahl reviewed the First Amendment guarantee of free speech and noted how historically it has been challenged.

He asserted that fake news is a challenge. He elaborated, stating that social media has created a no-holds-barred, Wild West lawless environment enabling anyone to introduce news without benefit of responsible editing and fact-checking adding that remote operators have created millions of fake Facebook identities,  and that these have often disseminated misinformation.

Grondahl related that the high point of his decades-long reporting career, which has taken him around the world was covering the inauguration of Barack Obama amid a crowd of 1.5 million in the nation’s capital. The record crowd could have been dangerous, but instead was orderly, which he contrasted with more recent experiences that he has had in Albany.

According to Grondahl, in 2016 he covered rallies for Bernie Sanders and Donald Trump. Sanders’ rally was held first, at the Albany Armory, and was massive and orderly. He discerned that the young crowd was inspired in a way that they had not been for Hillary Clinton.  Two hours later, Grondahl covered the Trump rally at the Times Union Center, and found again that the crowd was inspired, but in what he felt was in a scary way, as insults were hurled across police barricades separating Sanders and Trump supporters at the verge of violence, and as Trump supporters repeatedly and chillingly chanted “Build that wall.”

Bob Michaels is the chairperson of the CGOH Brotherhood Breakfast Speaker Program.