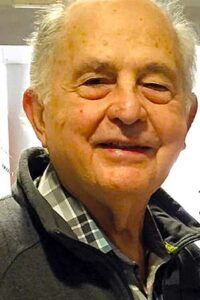 A memorial service for David D. Coplon will be held at 7 p.m. Wednesday, Oct. 30, at Congregation Gates of Heaven, 852 Ashmore Avenue, Schenectady.

David, 93, a math whiz and retailer who found his true calling in the pursuit of social justice, died on October 11 in Brooklyn, New York. Before moving there in 2012, he’d spent almost his entire life in Schenectady. The city had no prouder native son.

David was born on November 4, 1925. His parents, Jacob S. Coplon and the former Bessie Erlich, came out of the great wave of immigration from Eastern Europe. A 1943 graduate of Nott Terrace High School, David was a stellar student, most of all in mathematics. His high school yearbook nickname was “Einstein.”

Immediately after graduation, at 17, he enlisted in the U.S. Army. He served in the 28th Division, based in Heidelberg, Germany, where his Yiddish skills made him a valued translator. After the war, he attended Union College and earned a bachelor’s degree in statistics, followed by a master’s degree in business from Columbia University.

On June 26, 1950, David married the former Suzanne Kulik, an artist and interior designer, and the daughter of the legendary Joe Kulik of Joe’s Restaurant on Madison Avenue in Albany. Together they would raise a son and two daughters. The young couple spent three years in New York City, where David worked as an analyst for the Port Authority. They then returned to Schenectady, where David took the reins of his parents’ retail outlet, Coplon’s Woodlawn Department Store, on 1806 State Street. It was one of the first area businesses to hire black salespeople.

Aside from Suzanne and his children, David’s great commitment was to social activism, dating back to Henry Wallace’s 1948 Progressive Party campaign for president. In 1958, he co-chaired a joint project between the NAACP and the Jewish Community Council, a socioeconomic survey of Schenectady’s black community. He was active in the civil rights movement, and helped lead organizations dedicated to nuclear non-proliferation and to ending the Vietnam War. He served on the national board of the Committee for a Sane Nuclear Policy.

In 1971, David conceived the Temple Community Service Corps (TCSC) at Congregation Gates of Heaven. Over ensuing decades, hundreds of college-aged Temple youth became paid summer interns at local human services agencies. The experience inspired many of them to pursue careers in social work or related fields.

After closing the family store in 1986, David embarked upon his second career—as a full-time activist. As a sixty-something AmeriCorps VISTA volunteer, he energized the Schenectady Municipal Housing Authority’s Linkages Program, which connected low-income residents with education and job opportunities. He moved on to become founding director of JOBS etc., to guide clients entering the workforce. He had a banner year in 1998, when TCSC won the national Irving J. Fain Social Justice Award and JOBS etc. was honored by the New York State Council of Community Services. It was a deeply satisfying period for David, who loved making a difference in people’s lives.

David was active in Americans for Peace Now, Tikkun Associates, and the Metroplex Economic Development Committee. He won a national photography award and managed the Street Jazz Ensemble, a local band. After leaving JOBS etc., he was in his 80s when he created INFO-OP, a community directory, with Union College’s Kenney Center. Like all of his projects, INFO-OP stood for connection, inclusion, and David’s unquenchable optimism that we could make the world a better place. In recognition, Senior Services of Albany honored him with a Third Age Achievement Award.

David was a passionate fan of the Brooklyn Nets and the San Francisco Giants, of a competitive chess game and a good pastrami sandwich. He was a devoted husband to the love of his life, Suzanne, who died in 1991, and a loyal and affectionate brother to Arthur Coplon and Laura Garber, who predeceased him, and to Leon Coplon of Memphis, Tennessee. He was an exceedingly kind and proud father to his three children and their spouses: Jeffrey Coplon and Graciela Moreno, of Brooklyn; Miriam Coplon, of Schenectady; and Deborah Barone and Dr. Anthony Barone, of Alexandria, Virginia. He was an enthusiastic uncle, and a playful and doting grandfather to Steffen Nelson and Sandy Nelson, Rachel Barone, Jacob Moreno Coplon, Benjamin Barone, and Laura Musser and Nate Musser; and to great-grandchildren Mariah Morgan and Logan Musser.

A private memorial will be held in Brooklyn. Contributions may be made to Union College (memo line: “Kenney Center/David Coplon”), and mailed to Union College Alumni Engagement, 807 Union St., Schenectady, NY 12308.