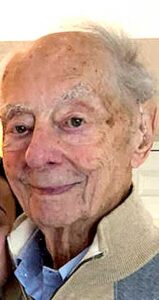 Murray Weissman
97, of Niskayuna died of natural causes at Ellis Hospital Hospice care on June 18th.  Murray was born in the Greenpoint section of Brooklyn, NY, one of six children, and attended CCNY (City College of New York). He also served in the Army. He moved upstate to Troy in the early fifties to become a lingerie buyer for the Peerless Company, a small chain of clothing stores. He was subsequently transferred to the Springfield MA and Providence RI stores where he continued as a merchandise buyer.

In the late sixties he returned to Troy as the Manager of the Troy Store. A few years later he opened his own upscale women’s clothing store, The Geranium Tree Ltd., in Latham at Plaza 7. In 1989 he and his son, Peter, purchased the Casual Set, a clothing store located in Stuyvesant Plaza, where he continued to manage the business until recently. Murray was a terrific merchant and a gifted salesperson.

He enjoyed antiquing and was an avid gardener. He cherished his grandchildren and great grandchildren and looked forward to their visits. He was a member of Congregation Agudat Achim, where he served on the education committee for many years and was a fixture at their annual Fall Carrot Festival.

The family would like to thank the staff at Glen Eddy, Home Instead Senior Care and Ellis Hospital for their excellent care.

Donations may be made to the Education Committee, Congregation Agudat Achim, 2117 Union St. Schenectady NY, 12309.