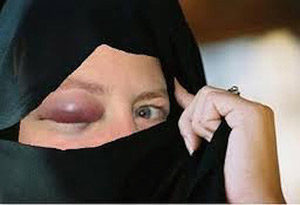 By ITAMAR MARCUS, NAN JACQUES ZILBERDIK (JNS) – A striking example was when right in the middle of a P.A. campaign to stop domestic violence against Palestinian women, Abbas’s adviser and top P.A. religious figure explained on TV exactly when, how and why husbands, fathers and brothers are allowed to, of all things, beat women.

While this campaign was running and teaching that it is never acceptable to hit women, Abbas’s adviser Mahmoud Al-Habbash explained on official P.A. TV that there are situations in which men are allowed to beat women. In fact, it is even good for the women: “As long as Allah permitted a certain type of beating, it is for the good. It is good for society and good for the woman and the man.”

When is it permitted? Not very often explained Al-Habbash; only when women are “disobedient”: “The one and only situation, which is very limited and very rare, in which a man is permitted to beat in a way that doesn’t harm, doesn’t injure, avoids the face and doesn’t cause strong pain in the situation of disobedience.”

What is a situation of the woman’s disobedience?

While Al-Habbash defends the practice, saying it is “rare,” the categories of women who may be beaten that he himself describes are so general that he opens the door for ongoing abuse: “The disobedient woman, the woman who is out of line, the woman who destroys the bonds of marriage, and the bonds of home and family.”

Discipline?
Al-Habbash quotes the Koran that he must not beat her immediately, but must try two earlier disciplinary measures: First, “admonish them, [next] refuse to share their beds,” (i.e., the husbands), and only then if the woman is still disobedient are the men permitted to beat them.

Al-Habbash indicated that the beating of wives should not be seen negatively since when the woman is beaten it is “good for the woman,” because she will learn and mend her ways. The man, however, cannot be beaten by his wife because it is ineffective. He “will repeat [the behavior] over and over because the man, let’s put it this way, his sensitivity is tougher.” In summary, it is no use for a Muslim woman to beat her husband because he will not learn, but a Muslim man, as a last resort, can beat his wife since it is “good” for her, and she will learn.

However, to demonstrate the range of Islamic law, Al-Habbash added that men too can be beaten—not by their wives, but by the courts, with “100 lashes” if they “are found guilty of sexual intercourse” before they are married. Again, this is a rule set out by the Koran.

On the topic of domestic beatings, Al-Habbash also taught TV viewers that it is permitted to beat boys at the age of 10 in order to motivate them to pray: “The beating here is educational beating … merciful beating.”