Old-world rabbi meets the Wild West in 1979 flick, ‘The Frisco Kid,’ at Temple Sinai on Aug. 5 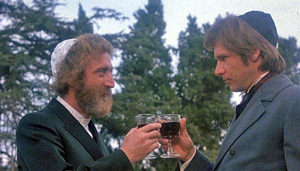 Gene Wilder as Rabbi Belinski, left, has a l’Chaim  with Harrison Ford as Tommy Lillard, his new friend and a bank robber, in “The Frisco Kid”  to be shown at Temple Sinai on Aug. 5.

SARATOGA SPRINGS–The comedic story of a rabbi of the old West will be shown at Temple Sinai, 509 Broadway, Saratoga Springs on Sunday, Aug. 5, with the screening of the 1979 film “The Frisco Kid” at 7 p.m. The film, shown as part of the Saratoga Jewish Cultural Festival, is open to the community.

According to organizers, the film is a musing on the tenacity of Jewish identity as well a story of interfaith, friendship and respect.

Gene Wilder plays a young Polish Chasidic rabbi, Avram Belinski, who is sent to America in the mid-1800s by his village to transport a Torah to a new San Francisco synagogue. Getting there proves to be a test of his stamina, adaptability, and his religious faith.

Robert Aldrich, the director, is not Jewish,“ says Festival Coordinator Phyllis Wang, “maybe that is why he was able to carry this off. Interestingly, Jews were often fearful of such Jewishness, even as late as the ’70s, apprehensive of the potential for greater anti-Semitism and public disfavor. In the 1947 award winning film “Gentlemen’s Agreement,” produced by Darryl F. Zanuck, coincidentally also not Jewish, Zanuck was strongly discouraged from producing the film by the big Jewish movie execs afraid it would stir up trouble.”

The film story relates how after docking in Philadelphia, Belinski is targeted and robbed by con men, comes upon Amish farmers who give him shelter and money to resume his trek, works on the railroad, meets a bank robber (Harrison Ford) who he befriends, escapes from a posse and other misadventures.

His absolute faith in God and Jewish law leads him to not ride a horse on Shabbat even with the bad guys chasing them, and this decision ends up saving him because it allows the horses the rest  and they they run faster after Shabbat. His religiosity earns him the respect of Harrison Ford’s bad boy cowboy.

A panel discussion and dessert reception will follow. A $5 admission/ donation is requested. Reservation and other information may be obtained by calling 518-584-8730, opt. 2 or at www.saratogajewishculturalfestival.org.

Jews and the mob to be the focus  of Saratoga Chabad on July 31
3,000 Israelis killed by tobacco in 2018? Tough laws can’t snuff Israel’s smoking habit!