On Sunday, the rabbi moved to Florida’s panhandle. On Wednesday, Hurricane Michael hit. 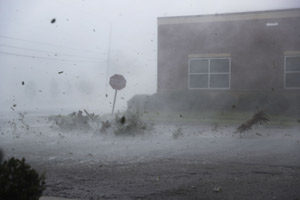 By BEN SALES
NEW YORK CITY (JTA) – When he and his wife moved to Pensacola, Fla., on Sunday afternoon, Rabbi Mendel Danow expected to spend the following couple of weeks settling in and buying supplies for their new home.

Instead, two days after getting off the plane, Danow found himself driving to a Walmart in Alabama to buy five 40-packs of water bottles. By Wednesday, the windows and doors of his new home were being covered by metal plates provided by their landlord. Instead of spending their first week in Pensacola alone in their new and mostly empty house, the rabbi Danow and his wife, Nechama, cooked up a stockpile of rice and pasta, and prepared to host 10 overnight guests.

The Danows, who were married this year, had planned to move to Pensacola to begin a life as emissaries of the Chabad-Lubavitch Chasidic movement. They landed in the path of Hurricane Michael, an ominous Category 4 storm that hit the Florida Panhandle.

Hurricane Michael made landfall on Wednesday, Oct.10,  near Mexico Beach, Fla., roughly 100 miles west of the state capital of Tallahassee, and about 120 miles east of Pensacola, which is on the Alabama border. Maximum wind speeds topped 150 miles per hour. The storm is being called the worst the area has seen in a century.

In Tallahassee, which is further inland, Jewish leaders were calm. Both the Reform and Conservative synagogues secured their Torah scrolls.

Tallahassee Jewish Federation President Ellie Simon told JTA that local Jews, including students at Florida State University, which has a sizable Jewish population, appeared to be secure as of Wednesday afternoon. Before Hurricane Michael, the federation had been raising money for victims of Hurricane Florence, which recently hit the Southeast.

Mark Goldman, a past president of the local Jewish federation and Congregation Shomrei Torah, a Conservative synagogue, said that most people in Tallahassee stayed put. While he said hurricanes may be becoming more frequent, he has no intention of moving away from the area.

Rabbi Danow, who grew up in Sweden, had no prior hurricane experience for comparison. He and his wife came to Pensacola after Danow had visited as part of a Chabad program. They hope to serve both the small local Jewish community and Jewish students at the University of West Florida.