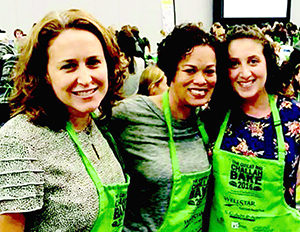 Jewish& is a blog by Be’chol Lashon, which gives voice to the racial, ethnic and cultural diversity of Jewish identity and experience. The original multicultural people, Jews have lived around the world for millennia. Today, with globalism and inclusion so key in making choices about engaging in Jewish life, Jewish& provides a forum for personal reflection, discussion, and debate.

Atlanta, Georgia, is home to one of the world’s largest and most active communities of Jewish moms. The Facebook group Jewish Moms of Atlanta or JMoA h as nearly 3,000 members and is a vib rant daily meeting place and resource. B e’chol Lashon caught up with Nicole Marcellus Wiesen, one of the founders and moderators of JMoA.

How did the idea for JMOA come about?
I’m originally from San Diego by way o f Miami and moved to Atlanta when I got married. As a new mom, I was looking for ways to connect with other Jewish moms. We were still shul shopping and h ad not yet found a congregation that met our needs. I wanted a Jewish mom’s g roup. There was not much out there. I went to a mommy and me group that was being hosted by Chabad Intown. I met a f riend there and we were discussing the lack of places for Jewish moms with little kids to connect, so we decided to start one.

Did you start online?
No, at the time Meet Up was the big thing so we began there with a few dozen people, and then when Facebook took off JMOA was moved over there. As of late March, there are 2,904 members.

What was your inspiration and vision for JMOA?
I’m not your typical white Ashkenazi Jew. But growing up in San Diego people in the Jewish community never asked me if I was Israeli, or if I converted or anything like that. If you came to synagogue t hey were just glad you were there. Everyone was welcome. I wanted to create a similar space for Jewish moms.

Have you succeeded?
I’m always amazed. JMOA is a judgment-free space where moms ask all kinds of questions, get help, get advice, share and connect. It does not matter if you are ultra-Orthodox or secular or just married t o a Jew. If you are in a Jewish family y ou are welcome. People who would never meet in real life because they have different life experiences or live in very d ifferent geographic locations connect and help each other.

What kinds of things do people ask about?
Everything! From asking advice on finding a mohel, to getting help updating my underwear drawer, to navigating life as a mother with a child with disabilities. And if there is trouble, It is amazing to see how the community comes together. One time a woman wrote that she was in an abusive home situation. The community rallied. One woman opened her home. People helped supply her with clothing and other practical goods. Money was raised. Together we got her to a better place. It is like a sorority without the sorority stuff.

The biggest compliment is when other mom’s want to create similar groups in other counties, like East Cobb or Alpharetta. It is a sign that we have created such a safe space that women can get support and make connections.

Last year, we collaborated with other Jewish organizations in Florida. When their community was threatened by a hurricane together with local synagogues we coordinated and took in families across the Atlanta region. It was amazing to see all the Jewish moms who don’t know each other helping each other.

So it is not just an online community?
It is primarily an online community. But then people get together with other JMOAs who live locally. They meet up to play with kids in the park. We just did a Shabbat dinner at my house. I am grateful because through JMOA, I’ve made friends with all kinds of people and because of that my Jewish community is diverse in so many ways.

One of my favorite events was last year the Challah bake which was sponsored by Chabad. We had two official tables but the whole room was filled with Jewish moms. It was overwhelming. People who I only know from online were coming up and thanking us for creating a safe space for connecting them to community. It was surreal.

Is there anything that JMOA does not discuss?
Politics. We have a separate page for that because during and after the election it got too complicated.

Has JMOA changed you?
My level of understanding and depth of knowledge has grown to make sure I can help everyone feel comfortable and also to help answer questions. If something comes up that I don’t know, I have a group of halakhic advisors and I get information back to the mom or group. I’ve learned a lot.

But the real change for me is in being a mom. Becoming a mom made me a more engaged Jew. I want to make sure our history as a Jewish people my experience as a Jewish woman is passed to my son so he feels the pride in it. One of the greatest joys I had with my son was when we took a nature walk he told me to be quiet. He asked, “do you hear it in the wind? Hashem is talking to us.” For my then 3-year-old to have that engagement and connection to his Judaism solidified my reason for wanting to do that for other women.