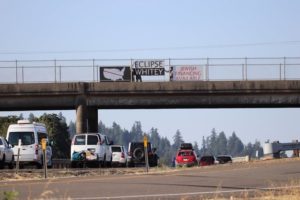 Tourists driving to Oregon for the solar eclipse spotted an Anti-Semitic banner Saturday on an I-5 north overpass.(Michael Dershowitz)

By Jessica Floum, jfloum@oregonian.com
The Oregonian/OregonLive

A family driving north from California to see Monday’s solar eclipse from Oregon found hatred on the freeway Saturday morning after they entered the northwestern state.

Beth and Michael Dershowitz and their kids saw the first banner south of Eugene. It said: “UNJEW HUMANITY.”

They felt shaken, Dershowitz wrote in an email.

Then they saw three more just south of Salem, facing south on an I-5 overpass. Two of them read “Eclipse Whitey” and “Jewish Financing Available.”

Michael Dershowitz wanted to confront the men behind the banners, his wife wrote, but he didn’t because she feared for her children’s safety.

The father took a photo instead.

British Jews hide being Jewish in public amid rise in anti-Semitic hate
Self-serving neutrality: Moral vacuum at the White House