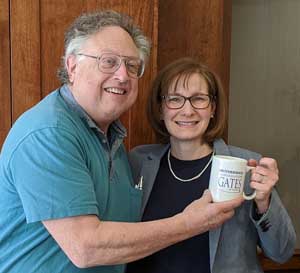 What motivates a concerned citizen to enter politics? This was the question addressed by Congregation Gates of Heaven (CGOH) member Michelle Ostrelich at the CGOH Brotherhood Breakfast-and-A-Speaker Program on Feb. 9.

Ostrelich was elected to a four-year term on the Schenectady County Legislature in November of 2019. She represents District 3 including Niskayuna, Glenville, and Scotia. Ostrelich, a graduate of Cornell University with a bachelor’s degree in policy analysis in 1994, and the University of Connecticut Law School with a JD degree in 1997, elaborated on how her career trajectory had progressed from concerned citizen to community activist and later to political office holder.

She outlined five rules that have guided her career.

Get To Know Your Neighbors
Ostrelich related a story of speaking with a neighbor and learning of the personal impact of high health care costs.  The neighbor said she could not pay both her mortgage and health care in the same month. This, Ostrelich learned, was because reproductive health services offered by Planned Parenthood were, for religious reasons, not offered by her medical provider. Health care, Ostrelich reported, has been the paramount issue of concern among her neighbors.  She advised, “next time you meet your neighbor, try to have a meaningful conversation”

Show Up And Step Up
Ostrelich recalled how she had appreciated the welcome offered to her and her family when they moved to Niskayuna. She also recalled being asked to “step up” by accommodating members of the Northeast Federation of Temple Youth (NFTY) in her house during the group’s convention in Niskayuna.  Later on, in 2017 as chairperson of the Maccabee Games for the Schenectady Jewish Community Center, she involved others by asking them to do the same.

Ostrelich said that she stepped up frequently. She joined boards of directors of organizations with missions that she felt were important. “Every time you meet someone,” she said, “you have the opportunity to leave him or her better off than they were.”

Don’t Fear Public Speaking
Public speaking frequently is one responsibility of people in leadership positions. Ostrelich advised listeners to enjoy it.  “Indeed,” she said, “it gets easier the more you do it!”  She also confided that she endeavors to speak the way she wants others to speak: respectfully.

It’s All About The Process
Ostrelich said “Part of being involved is bringing your own expertise to the table.”  She was influenced, however, by former Schenectady Mayor Karen Johnson (1983 to ’91).  She credits the former mayor with saying “If you’re doing it alone, you’re doing it the wrong way.” Ostrelich, therefore, also advocated involving others in her causes: “Diversity is important, as you end up with a better product.”

Believe In Your Mission
“Voters deserve to know who you are,” Ostrelich said. “For example,” regarding reproductive rights, “I am pro-choice.”  Her final piece of advice was to “believe in your mission, and be authentic.”