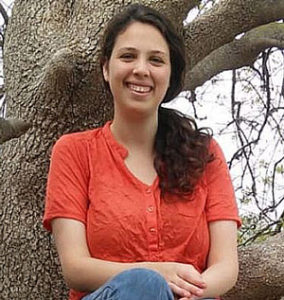 By ITAMAR MARCUS and NAN JACQUES ZILBERDIK
(Palestinian Media Watch via JNS) – Three days ago, 19-year-old Israeli Ori Ansbacher was stabbed several times and brutally murdered in Jerusalem. DNA from the scene led Israel to the Palestinian, 29-year-old Arafat Arfiah, who was captured after soldiers entered a mosque and seized footage from its security camera.

Priorities
Palestinian Authority Minister of Religious Affairs Yusuf Ida’is ignored the fact that a young Israeli woman had been attacked, stabbed, and murdered by a Palestinian, but was quick to “condemn” Israel’s entering the mosque to search for the terrorist as an “attack,” according to the P.A.’s official daily. Moreover, not only was there no reference to the murder in the minister’s quote, this entire article in the official P.A. daily did not even mention the terror attack and murder as the context of Israel’s search to the mosque.

Absurdly, the minister complained that the Israeli soldiers’ entrance into the mosque lacked “any consideration for its sanctity and its religious and spiritual value.” Concerned about “sanctity” and “spiritual values,” he didn’t even mention the innocent 19-year-old Israeli victim:

“[P.A.] Minister of Religious Affairs Yusuf Ida’is condemned the attack against the sanctity of the Jamal Abd Al-Nasser Mosque under baseless and unacceptable pretexts. Ida’is said in a press statement that this cowardly attack against a religious and sacred place of worship, without any consideration for its sanctity and its religious and spiritual value, constitutes part of a series of daily attacks against our Islamic and Christian holy sites, and particularly the Al-Aqsa Mosque, the pearl of Palestine, by the occupation forces and unbridled settlers and under political cover of the right-wing occupation government.” [Official P.A. daily Al-Hayat Al-Jadida, Feb. 9, 2019]

Nationalistically Motivated?
The headline did not mention the murder either, but focused solely on the “occupation’s raid”: “The occupation raided the Jamal Abd Al-Nasser Mosque, the Sateh Marhaba neighborhood and Al-Quds Street in El-Bireh”

Media reports in Israel have stated that the Palestinian has confessed to the murder, but that it is not yet clear based on his statement if it was nationalistically motivated, meaning an act of terror, or criminally motivated.

The distinction is of significance for the murderer, especially in terms of how the Palestinian Authority decides to view it. If this was a nationalistically motivated crime—i.e., terror, what the P.A. terms “struggle against the occupation”—then Arafat Arfiah will be entitled to receive a monthly salary under the P.A.’s “Pay to Slay” program with which the Palestinian Authority uses to reward terrorist murderers. Should this be the case, prisoner Arfiah will receive at least 1,400 shekels/month starting from the day of his arrest, eventually rising to as high at 12,000 shekels/month.

In a second report, the official P.A. daily in order to give a more positive spin on the murder, falsely claimed that murder victim Ori Ansbacher was “a female soldier in the occupation army.” [Official P.A. daily Al-Hayat Al-Jadida, Feb. 10, 2019] In fact, Ansbacher was a civilian volunteer performing national service at a youth center.

From the initial details, it seems the entire incident unfolded at random. While the murderer did leave his home in Hebron with a knife—not an unusual detail in and of itself—he only decided to harm Ansbacher upon encountering her. As of Saturday night, the Shin Bet has been unable to determine whether Irfaiya intended to murder Ansbacher as soon as he saw her or if he was dragged into the act. The Shin Bet has also yet to ascertain whether Ansbacher’s murder was the result of a criminal attack that went wrong or whether she was killed simply for being Jewish.

Combination Of Factors
Past incidents have shown that this likely a combination of factors; a criminal incident that is tied to a nationalistic motive.

At 29, the killer is relatively older, and he has a security past. He was detained in 2009 after exhibiting suspicious behavior in the vicinity of the Cave of the Patriarchs in Hebron. A search of his belongings uncovered a knife, and he was sentenced to a few months in prison. There is no information that points to Irfaiya having engaged in criminal or terrorist activity following his release. The Shin Bet will now try to ascertain whether or not he belongs to a terrorist organization, although the details of the case thus far indicate he acted alone.

Ansbacher is the first terrorist victim of 2019. In recent months, security forces have escalated their activity in Judea and Samaria and the Jerusalem periphery following an uptick in attacks. But along with the relative calm that has been achieved, this has also led to security forces being spread thin. Yet it is doubtful if more expansive activity could have prevented this fatal encounter.