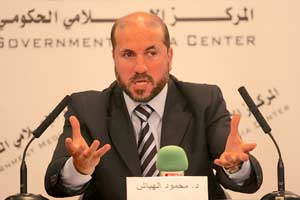 Mahmoud al-Habash, P.A. Minister of Religious Affairs, during a news conference in Ramallah, on Aug. 15, 2010. Photo courtesy of Issam Rinawi/Flash90.

(JNS) – Speaking in the days leading up to U.S. President Donald Trump’s unveiling of his peace plan last week, top Palestinian Authority official Mahmoud al-Habbash warned that acceptance of the deal would be “humiliating” and “shameful,” and threatened that whoever does accept it “will pay the price of treason.”

Moreover, according to Israel-based watchdog group Palestinian Media Watch (PMW), Habbash, the P.A.’s Supreme Sharia Judge, taught that to die as a martyr fighting the deal is far better than to accept the “filth of the century,” as he scornfully termed the plan, which is commonly known as “the deal of the century.”

Following the publication of the U.S. plan, the official title of which is “Peace to Prosperity: A Vision to Improve the Lives of the Palestinian and Israeli People,” Habbash called on Islamic preachers to use their Friday sermons to speak against the deal, which he defined as “a crime.”

He urged Islamic preachers to “declare a decisive position against this crime that will satisfy Allah and His Messenger [Muhammad],” according to official P.A. daily Al-Hayat Al-Jadidah.

Immediately after the publication of the U.S. plan, P.A. leader Mahmoud Abbas’s Fatah faction called on Palestinians to “defend Palestine with their blood and soul,” according to PMW, while one of Fatah’s spokesmen, Osama al-Qawasmi, called for “escalation of the popular struggle”—a term used by P.A. leaders to refer both to peaceful protest and terror attacks.